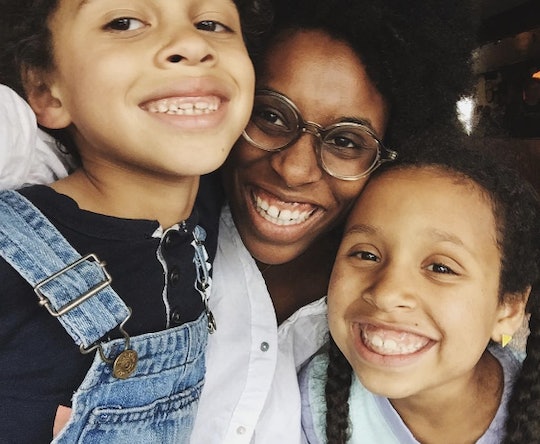 When I was first married, I never once thought about stepparents being part of my children's lives. Even when my ex and I began to think about divorce, I never considered to the possibility of other adults helping us raise our two children. But once we were separated and started dating other people — at first casually, then seriously — my ex and I kind of avoided the conversation with our respected partners about being stepparents. Because my ex-husband and I have a good relationship, we'd talk about the possibility, in the way, way future, of our kids having stepparents, but we always treated it like it was a universe away, and that we weren't ready to allow other adults opinions or thoughts about how to parent our children. To be honest, in those early days, it felt almost invasive. Leif and I had become parents together, and to give that up to make room for other people just didn't feel right, regardless of whether or not we were married. And though we were steadfast in our feelings, we realized we'd left two of the most important people out of the conversation: Our kids.

Riley and Beck, my two children, have two totally different temperaments and feelings. And we're letting our children decide what kind of relationships they want to have with our new partners. For us, that matters. A lot. Our daughter has always been open-hearted. She loves so hard and so fast. Beck, on the other hand, is incredibly loyal, and much slower to bring people into his inner circle. Riley will try everything once, but Beck wants to examine every inch of it before deciding it's something he'll try. And when we first waded into the waters of the step-parent conversation, thinking about how they'd respond was a total gamble. As their parents and primary caregivers, Leif and I wanted to give them space to process their feelings about it. Riley, who's 7, was excited at the prospect of more adults taking care of her. When she was 4, she asked me when I was going to get a boyfriend, even though I was still married to her dad. She just wanted more parents to love her and take care of her. But Beck's reaction was totally different. He let us know immediately that he didn't need any more parents. He only wanted us.

Within a year of being with my current partner, we'd move in together and started talking about marriage. My daughter, who'd met and loved my partner, would often ask,"When will he be my stepdad?!" Beck, however, would remind me, "I already have a dad!" If we would go on outings, the four of us together, my son would shout at people, "This isn't my dad! Its just my mom's boyfriend!" It always made me laugh, but I noticed he was intent on making sure the lines were drawn. With my ex's partner, Beck was much more in their face about his feelings. He constantly reminded them that he already had a mother, and that they weren't his mother. If they ever offered to hold his hand, or pick him up, he'd slouch away, shouting "no!" As much as I don't want to be replaced, and although a tiny part of me got a little bit of joy out of hearing that, it didn't make me feel good to know that my son was being rude to someone who's become so integral to our family.

We talk openly and often about how blessed they are to have so many adults loving and caring for them. I don't want them, especially my son, to overlook the privilege they have of being raised by not only their mom and dad, but by two other people who love them almost as much.

Letting my children decide how and what kind of relationships they want to have with their stepparents has shown them how much their dad and I respect them and their choices. And it shows us how amazing the depth of our kids' love for us goes.

Even though having our family dynamic shift wasn't what I had planned for us, adding more family members to our family has only benefited us all. My kids are surrounded by love. We talk openly and often about how blessed they are to have so many adults loving and caring for them. I don't want them, especially my son, to overlook the privilege they have of being raised by not only their mom and dad, but by two other people who love them almost as much. I want them to see what I see when they have four parents showing up to birthday parties, holidays, and school events: that they are so overwhelmed with love by people who care about them, and those people don't begin and end with their birth mom and dad. My daughter sees it, and celebrates it more, and I think my son is slowly getting there.

Letting my children decide how and what kind of relationships they want to have with their stepparents has shown them how much their dad and I respect them and their choices. And it shows us how amazing the depth of our kids' love for us goes. We've never tried to force a relationship on them, and we will never will. But Riley and Beck know that they are loved, they are safe, and that they have a web of adults in their lives who care about them as deeply and as completely as their mom and dad do. They're lucky, but so are we.

The people who enter into relationships with my ex and I also enter into relationships with our children. My current partner has also built a relationship with my ex, and vice versa. We've learned that we all need each other. Early into my dating experiences, I didn't understand just how powerful having two more people to advocate and stand alongside your children could be, but now I do. I'm blown away by the support we have, and the patience we all exhibit with one another. My son recently requested that my partner hold him, then climbed into his lap to show him something he was reading. I tried not to make a big deal about it, but I was so excited. My daughter will talk about how she loves each of our parents, but my son isn't quite there yet. When he comes over to the house though, he'll ask for my partner, and ask to call him if he's not home. I was once concerned that he wouldn't come around, but as I'm learning, time is a beautiful thing, and it's on our side.

One night while doing my daughter's hair, she said, "I'm a little afraid of having a stepparent. I feel like once you get married, then they'll be mean. I saw that in a book and on TV." Too often the narrative around stepparents are treated like villains. The birth parents are the only "good" ones, and their children suffer at the hands of their stepparents. But I'm happy my children are seeing a different side of that coin. They're living out a very different reality. Of course they need time and space to be comfortable with their new family dynamics, and I'm more than happy to give them that. So is their dad. And so are our partners. No matter how long it takes them, my kids know they are loved. Truthfully, that's all that matters.