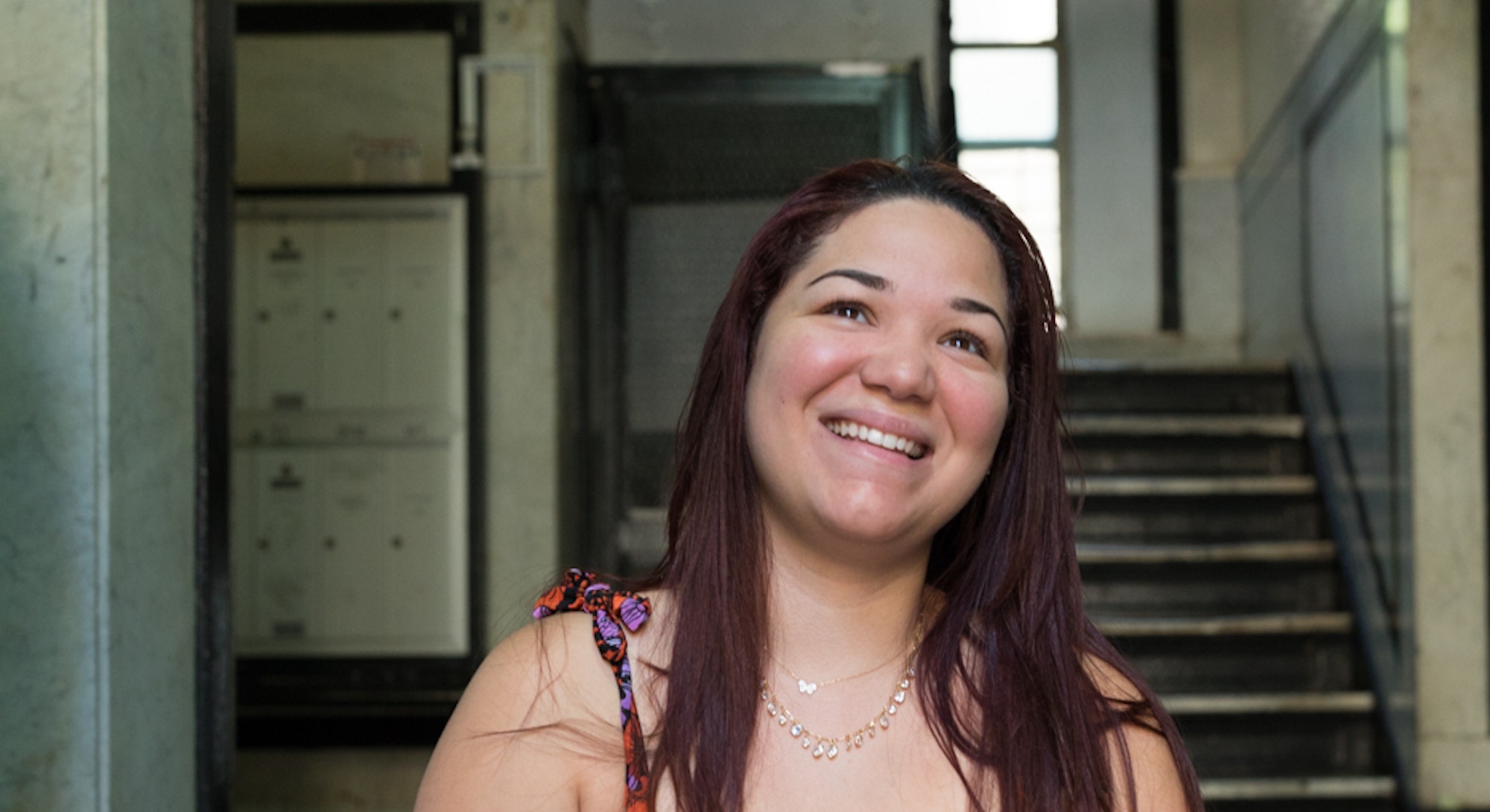 Why I'm Spending My Late Twenties Raising Kids Who "Aren't Mine"

Virginia Contreras, 27, runs a busy bi-lingual household in the Bronx. There is an ever-changing number of children in her home, but only one of them is her biological child, Nicole, 4. She also has two adopted children, Joyce, 11, and Antonio, 9, who initially came to her for foster care, and when we speak, she has two current foster children, Deniz, 18, and Tatiana, 17. Deniz and Tatiana are two of the seven children who have been placed with Virginia as foster children through the New York Foundling, a New York-based non-profit that offers a variety of services for underserved populations, including foster care placements and foster parent education.

Virginia and her husband, Maicor, 29, specialize in fostering children who are known within the foster system as “therapeutic” cases — children who come with disabilities, behavioral challenges, or other special circumstances that require foster parents to be specially trained to care for them. Maicor's parents are also foster parents; for this family, fostering children is a multi-generational calling.

Right now I have two foster children staying with me, Deniz and Tatiana, both teenagers. On February 28th of this year I adopted two kids, Joyce and Antonio, so now they are my daughter and my son, like my biological daughter, Nicole. They were my foster children first, and they also have disabilities.

Deniz is my oldest foster child. She is a teenager, 18 years old. Once Deniz turned 18, she chose to remain with me in foster care. [New York State is one of 25 states that offers extended foster care beyond the age of 18 under certain circumstances, such as when children are enrolled in school, vocational, or employment programs.] She’s working to obtain her GED and looking for a full-time job. She also participated in a summer youth program this past summer and continues participating in independent living workshops and a youth development program.

She is very nice and talkative. She is very respectful, and doesn’t say bad words. I have known her for more than two years because she was first a foster child in my mother-in-law’s house. And then she went AWOL because she wanted to spend time with her boyfriend. [According to the Child Welfare League of America, close to 50 percent of the children in foster care run away at some point.] It was almost a year that she was [gone]. She agreed to come back into foster care because she was afraid to be on her own and was worried about her health and being able to take care of herself. She’s been with me for a year.

Deniz has an Individualized Education Plan (IEP) in school because she has learning disabilities and needs a restricted area in the school. Additionally she takes medications to sleep, because it is not easy for her to sleep. And she is diagnosed with bipolar disorder. It is not easy to have a kid with bi-polar because you need to know how to talk to them. You can say something, and they can turn it into something that you didn't say. When you communicate with them, you have to speak in a tone that makes them feel calm and comfortable, especially if they're in a situation where they feel upset or overwhelmed.

For my adopted children, Antonio, he has Oppositional Defiant Disorder (ODD) [a disorder in which a child has a pattern of defiant behavior and vindictiveness toward authority figures], Posttraumatic Stress Disorder (PTSD), and a mood disorder. Joyce has Attention-Deficit/Hyperactivity Disorder (ADHD). Both children have IEPs, but Antonio is more restricted. Joyce is in Integrated Co-Teaching Class [which is a classroom in which children with disabilities are integrated with their typically-developing peers in school]. Antonio is 9 and Joyce is 11. I have had them with me since they were 3 and 5. I took me four years, but I adopted them this year on February 28th.

The second foster child, Tatiana, has only been with me for a week, so right now I don’t have much information about her. Maybe later when the social worker comes, she’s going to tell me everything. I know Tatiana has two kids, a son and a daughter. Tatiana's children are also in foster care, with another foster mother. She doesn’t like to [discuss] it too much, but she does sometimes talk to me about what will happen if she’s reunited with them, and how she’s looking forward to that moment. I’ve always told her that I will support her through that process, and that my home will always welcome her and the children.

Having foster children is challenging because I get attached to them. I know that when I did the first foster parenting training they told me, “Try not to get attached to the kids, you have to understand it is only for a [limited time]? that they are under your care and then they return to their parents or relative or whatever.” But it is difficult. You live with somebody for a year or two and they leave, like that? It is really hard. You have to be prepared.

A lot of people tell me, “Oh, you are very young, why are you working with kids that are so difficult?” I foster kids with disabilities because I find something special in them when you start working [with the kids]. It is something that comes from inside. I don’t know how to explain it. It is more like a need. It is something in me that I like to work with those kids. Some foster parents don’t want to work with therapeutic kids, so the children feel rejected. That is why I work with them, so they don’t feel like they are alone. So they can have a family also.

You do need to have patience to deal with [therapeutic kids]. For example, we had a problem in the school. Antonio got a pencil and stabbed another kid in the chest. And then at the end of the school the [other child's] father was waiting for my husband outside to fight with him. My husband tried to calm him down and explained to him that Antonio has some aggression behavior and that he is getting treatment for this. He completely apologized for the situation, and told [the other father] he hoped his son was okay and that he would work with Antonio to ensure that his aggression gets under control so that instances like this do not continue. These are some situations that maybe some parents get scared about, and that’s why they don’t get involved in foster care.

We do have a lot of support because my husband’s family [members] are all foster parents. And the New York Foundling offers training all year. You have to be keeping up with training constantly every year to keep your license. There are trainings on behavior management, medications, special and exceptional child training. Therapeutic children need more training because it involves more people; it involves more work. Other people are impressed by how my husband and I manage [tantrums and other behaviors]. But [we know how] thanks all of the trainings.

The foster care kids need love. Deniz, for example, she is 18 years old but she likes me to talk to her in that sweet tone. We talk more in Spanish than English, but sometimes in English, I say, “Oh, Deniz, look at this shirt, you look beautiful.” Or like, Joyce, she got into something with a friend at the school and the end of the day she told me “oh my friend did this and back talked to me. And I said ‘Wait for my mom. When she comes and picks me up, you’re going to see my mom.’” She knows I am there for her. She knows she has her mom.

I’ve legally adopted Joyce and Antonio, so they are my kids now, and they will remain with me forever. Deniz opted to stay with me after she turned 18, and I hope that she and Tatiana will remain with me for as long as they can. I will always welcome my foster children into my home. They just need to feel cared for. They need to know they have somebody there for them.