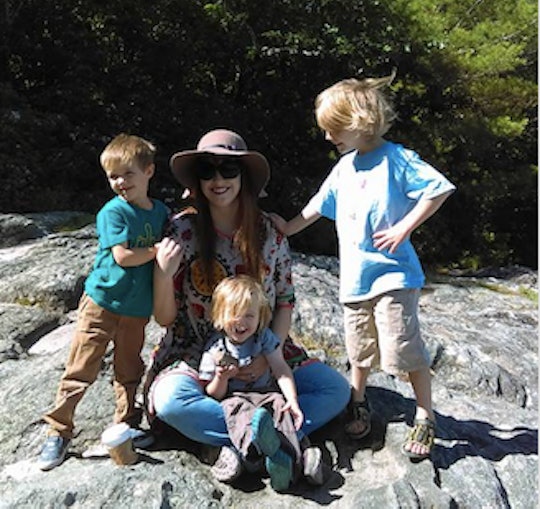 Why I'm Still Proud To Raise My Sons In America

Let’s be honest with ourselves, because honesty has been a good old American virtue since George Washington chopped down that cherry tree: America has sucked lately. Our political process is nightmarish: on one side, a candidate who's a fountain of hateful rhetoric, and on the other, an candidate who many don't trust. Day after day, the headlines change, illuminating yet another mass shooting in our country. We can't agree on acceptable gun laws that might keep our children alive. We’re burning through our oil so badly we’ve resorted to fracking. West Virginia is flooding. The Flint, Michigan water supply has affected thousands. A black man can’t get a fair trial and a white boy can’t get a fair sentence for rape.

But for all the racism, the provincialism, and the work our country has yet to do, I’m still proud to be an American. And I’m proud to raise my kids in America. I’m proud to raise my kids beneath the American Constitution. It was the first of its kind in the modern world, used as a copy for many worldwide. While the Second Amendment’s right to bear arms interpretation may cause disagreements, there’s not a thing wrong with the First. My kids are growing up at a time when they can’t be prosecuted for speaking against the government, either in writing or in speech. They have the freedom to assemble for political purposes, which is why I can go to meetings for everything from the local Republicans’ council to the hippie Peace Resource Network to the city’s National Organization for the Legalization of Marijuana without explaining myself to police.

My sons were there for South Carolina's Confederate Flag protests on the last Fourth of July. And we were there when they took it down. We were deeply proud of our home state on that day. Deeply proud to be Americans.

I’m proud to raise my kids in a place where black men and women have the vote. Though my sons have been born into privilege because of the color of their skin, I teach them to advocate and to be allies for marginalized groups and for people of color. And though the battle still hasn’t ended, I remind my sons that we can all come together to fight for fairness. I’m proud that my kids live in an America where, despite all of our shortcomings, we can elect a black president — twice. I teach them that one day soon we may have a woman in office. And I tell them how important that will be.

I want my sons to enter a government building and see a picture of a female president. And I hope soon, they will.

I’m proud to raise my sons in an America where women not only have the right to vote, they have — and use — the right hold public office. Hillary and I may have some policy differences, but I will weep if she’s elected later this year. It will mean that women have broken the highest glass ceiling in the nation, and though we don’t have adequate maternity care, adequate family leave, or adequate daycare, and even though women can’t get their rapists convicted, we are capable of holding the highest nation in the land. I want my sons to enter a government building and see a picture of a female president. And I hope soon, they will.

My sons are white males in a society that privileges that. So here in America, I have to teach them to help minorities and notice prejudice. I teach them to speak up, for example, if someone leaves out a classmate because of the color of their skin or the way they look or speak. I teach them to appreciate people's differences without being insulting, and because I homeschool, I make an effort to include mostly books about children of color. We read about Asian children and Mexican children, we eat shop at authentic Asian and Mexican food markets and make the food, and make an effort to talk to the proprietors. My sons will not be afraid to approach someone of a different skin color. And I hope they will look out for their basic rights as Americans.

We live in a big land. That big land lends itself to big dreams. I want those big dreams for my sons. So I’m proud to raise my children in America. I’m proud that, for all its problems, America always rises from the ashes to face the bright sun of a new day. We have a long, long way to go. I'm not ignoring or denying that. But I want my sons to know that they are important to the future of our country. That their voices matter. That’s what I want for my children. That’s what I want for all children in America.