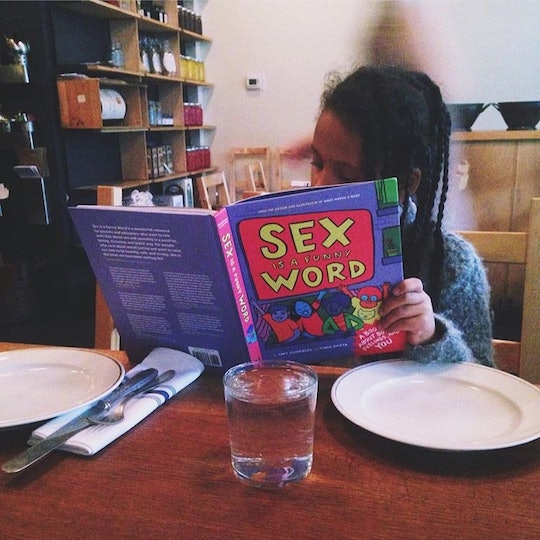 I talk to my children about sex. Not every day, but I talk to my kids about sex often. We don't talk about it in a graphic way, but we talk about sex from an educational standpoint. My children and I talk about how sex is natural, how it's healthy, that it's meant for pleasure — for everyone involved — for fun, and for purpose. I try to have a conversation with them the way that I wished my parents had talked to me about sex. I want them to be prepared with knowledge and tools to understand what sex is when they feel ready to explore it.

I was 18 when I had sex for the first time — without condoms or any knowledge, really, of birth control. Everything I knew up until that point about sex I'd collected on my own, because I grew up in a home that very firmly believed sex should only be reserved for marriage. Despite the fact that my parents taught young couples about marriage and sex at our church, we never, ever talked about it together. I hoped it'd be a conversation we would have once I was "old enough," except "old enough" never seemed to come. So I embarked on that journey myself, much to the horror of my parents. They'd made sex out to be this horrid thing, warning me that if I participated in it outside of the sanctions of marriage that I'd "suffer," but if I waited until marriage, I would be rewarded. With what, I never really found out.

So I continued to have sex — unprotected — for almost two years. It wasn't until I met my first husband that we sat and talked about safe sex and I realized how important and valuable it was to be open and honest. I made a decision right then and there that when the day came, I'd have this conversation with my children, sooner rather than later. They'd be prepared, no matter what.

We talk about how sex is for purpose and for pleasure, and that they should never feel guilty for wanting to enjoy one over the other — or both at the same time.

At 6 and 7 years old, my kids have a general idea of sex. Of course we don't dive into the "dirty," explicit details, because they'd just harp on that or worse, they'd miss the point entirely. We talk about the science and the purpose behind sex; we discuss appreciating our bodies, and how, when you have sex, you appreciate not only your body but someone else's. We talk about the importance of listening to our bodies, respecting our bodies, and the bodies of others. We talk about how sex is for purpose and for pleasure, and that they should never feel guilty for wanting to enjoy one over the other — or both at the same time. I want to plant these roots for my kids so as they grow up, they never for a moment view another person's body as theirs. I don't want them to ever think that what they value is more important than what someone else values, or that their beliefs give them privilege to make commandments over someone else. I want them to see their own bodies as magnificent and wondrous. I want them to know that their bodies are capable of great things, but that they need to respect them so they know how to recognize when someone is or isn't respecting their bodies.

I want to give my children the space they need to ask questions if they want. I want them to know what happens if they have sex without using protection, and how those choices could change their lives.

I don't know when or if my children will have sex before they become adults, but I will equip them with the knowledge and tools to handle it whenever they decide they're ready. I think too often the concern with telling your children about sex is that they'll instantly want to participate in the act. In some ways, I think that's what my own parents thought, and because of that, we ended up never talking about it. But as a mom, The Sex Talk has become an active conversation we have in our home, one that's going to take place again and again in the coming years. I want to give my children the space they need to ask questions if they want. I want them to know what happens if they have sex without using protection, and how those choices could change their lives. I want them to know everything they need to make an educated, conscious decision. I don't want my kids constantly feeling like they need to "clean up" the messes they've made.

Talking about sex also gives us an opportunity to talk about body positivity and sex positivity. Because I grew up around such limited sex education, I know just how easy it is to skew the sex conversation toward shame for women and a "right" for men. So my 7-year-old daughter is going to grow up understanding that her sexuality is hers, and that the sex she has is her choice. She'll also learn that her right to sex is just as valid as anyone else's. I want her to own her sexuality, to hold it in her hands, and to know what it is and what it is not. I don't want her to think that because she is a woman she owes it to anyone else or that to be a "good" partner later in life she needs to be "whole" and "pure."

The first time my daughter walked in on me and her dad having sex, she was about 4, and she simply said, "Oh! You're having naked time!" then walked out. Of course, she asked about it later. So we explained — using her phrase "naked time" — that what we were doing was something people do when they love, care, and respect each other, and that sometimes, doing that can create babies. Eventually we let her know that "naked time" was actually sex, which didn't surprise her. But because we'd been open and honest with her, our conversations began to focus more on a woman's role during sex.

If I didn't have this conversation with my children, they'd get another version of it based on movies, TV shows, magazines, and books, and those messages are often convoluted and constructed by the male gaze.

Now that she's older she watches me get dressed, often trying on my clothes and doing her makeup as I do mine. I use these moments to talk to her about value and worth. We talk about dressing up for ourselves, not to impress anyone. We talk about how our bodies are ours, and in turn, sex is ours to decide who to share it with. My daughter is also interested in consent, something she equates to hugging her friends or having people hug her. Recently she told me about a boy she likes and said, "Mom, I like him, but I don't want to hug him yet, is this OK?" When she articulates the things we've talked about, it makes me feel as if we are doing alright.

The first time my son Beck and I talked about it, we were at Planned Parenthood. He was looking at the charts, and asked me about the vagina. I talked to him about it, told him thats where a penis goes in, so people can have sex, and sometimes make a baby. His response was, "That is so gross! I would never do that!" But then he continued to examine the chart and later responded with, "maybe when I'm older I'll understand." I agreed. As a 6-year-old little boy, he always wants to run around naked and talk about poop and pee, and it gives us a good chance to talk about why we don't take off our pants at school, around other children, or even at home for the most part. We talk about sex in a way that he understands. "We don't touch people without asking, Beck," I tell him when he's trying to lay next to his sister. I remind him that we "don't just pull people's clothes off!" when he's trying to pants his sister as a joke. Talking about these things makes sense for us, because they're all connected to understanding sex.

If I didn't have this conversation with my children, they'd get another version of it based on movies, TV shows, magazines, and books, and those messages are often convoluted and constructed by the male gaze. Plus, they're just not real. I'd rather control the way my children learn about sex. They need to understand the different ways to approach it, and that it doesn't exist in only one form.

I understand that 6 and 7 might seem a bit young to have the birds and the bees conversation for some people, but I think it's just right. Children understand that they possess bodies, and they understand that we interact with other bodies. They know about sex, however vaguely they've been introduced to it. So why not begin to address it now, in a context that they can understand? I personally never feel it's too early to talk to your children about their bodies, or what their bodies might feel or not feel.

I talk to my kids about sex because I want them to have an understanding before they are presented with the opportunity to act on it. I want to give them time to develop their own thoughts and ideas surrounding sex. I don't want them to only make those choices based off of anything they've heard from a peer, or seen in the media. I want them to start with a strong foundation, one they can build from. And I want them to know that no matter what, they can talk to me about sex.