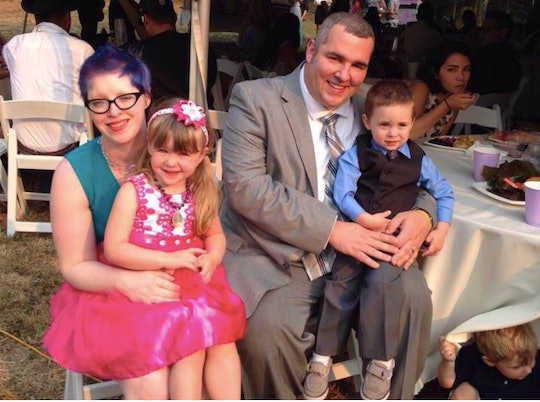 Why I'm Teaching My Kids The Correct Words For Their Privates

Winkie, pee pee, hoo-ha, flower, whatever you disguise it as, these provide just a glimpse into the popular phrases parents teach their kids in lieu of using the scientific terminology for the penis and vagina. It can be cute when a toddler boy is struggling to pull up his underwear and yells, “Help! My winkie is stuck!” but I set out from the beginning to teach both my son and my daughter to use the correct terms for their private parts. I believe doing anything else would be sending the wrong message, teaching them that they should be ashamed or embarrassed by the parts they possess.

At first my husband balked at the idea. He wanted us to use cutesy words instead of the real terms. When I pressed him, the biggest argument he had was that he struggled with using the word “vagina” with his daughter. Something about it made him uncomfortable. Is it because our culture is way oversexualized? Is it because I, his wife, whom he makes loves to, uses that term, and it reminds him that his little girl will someday become a woman, too? We never got to the root cause of his anxiety, but I stuck to my guns, and when I explained my reasons, he came around. I don’t think he’s exactly thrilled of hearing his daughter say, “Dad, Brother has his penis out again,” but deep down, he’s come to learn that we picked one of the healthiest ways to raise our children so they’re proud of their bodies.

Boys and girls need to understand that there’s nothing wrong with the words “penis” and “vagina”. They’re just body parts. We don’t teach our kids fluffy phrases for their eyes and ears because we’re not ashamed of them. We call them what we are, because, well, that’s what they are. So why would we coddle terms for the private parts if there’s nothing “wrong” with them? I don’t want my children to grow up thinking that “penis” is a dirty word or that “vagina” shouldn’t be said in public. Don’t get me wrong — I’ll be less than overjoyed should they yell those words in the middle of a grocery store, but the fact remains: they’re just words. They’re just parts of us, as important as our eyes and our ears.

By teaching my children the proper terminology from the start, I’m saving myself the hassle of having to teach them all over again when they’re old enough. If I start off saying ‘hoo-ha” instead of vagina, I’m left helping them unlearn and relearn information which can be confusing and frustrating. Why didn’t I teach them the right words from the beginning? Why can’t I call it a “flower” anymore? Is there something wrong with calling it a winkie? Being young is confusing enough and I realized that to add onto that a discussion over scientific terminology simply because I thought it was cute to say “hoo-ha” does more harm than good for my child’s mental health.

I won’t leave my son and daughter wondering if they’ve been saying it “wrong” over the years. They won’t ever ask themselves, “Why didn’t my mom teach me these were called testicles? Why doesn’t Daddy call them that? Have I been doing it wrong? Am I stupid for calling it something else?”  I don’t want my kids to call their own intelligence into question just because I might’ve been too embarrassed of the word vulva.

As a parent, and a woman, I don’t want to take any chances. I don’t want there to be room for ambiguity. If my husband, our families, and friends are all on the same page about what to call their genitals, then we’ll know for sure if, god forbid, our kids have been exposed to sexually abusive behavior. My daughter is 3-and-half and my son is a year younger, which means they may not possess the proper communication skills to tell me if something like this does happen or even the emotional maturity to come to us about it. By maintaining consistency in the terminology, it allows them to clue us in about anything that has happened without feeling shame or embarrassment or confusion.

Should my daughter come home from a friend’s house one day calling her vagina something else, it’ll serve as an automatic red flag for me. It doesn’t ensure I’ll be able to keep her safe, but it does mean I’ll be on the phone with everyone who has had contact with her to find out what the hell happened. It’s a means for me to keep her protected and armed with facts. I want her to know, even at 3, that she has totally control over her body.

I don’t want my children to be ashamed of their bodies. They’re already growing up in a broken culture, one where many of us are trying to fight our own shame cycles. So I am teaching my kids to call a penis a penis, and bringing them up in a home where we don’t shy away from genitalia-related discussions. My partner and I are raising children who will grow up to be more tolerant and open to others’ sexuality. The best way I can empower my children is by teaching them that their bodies, from their head to their toes, are nothing to be ashamed of or embarrassed by. It’s why we’ll never use the word “winkie” or “flower” in our home. It’s why we’ll never teach shame to our kids. Unfortunately, society has plenty of time to teach them that.