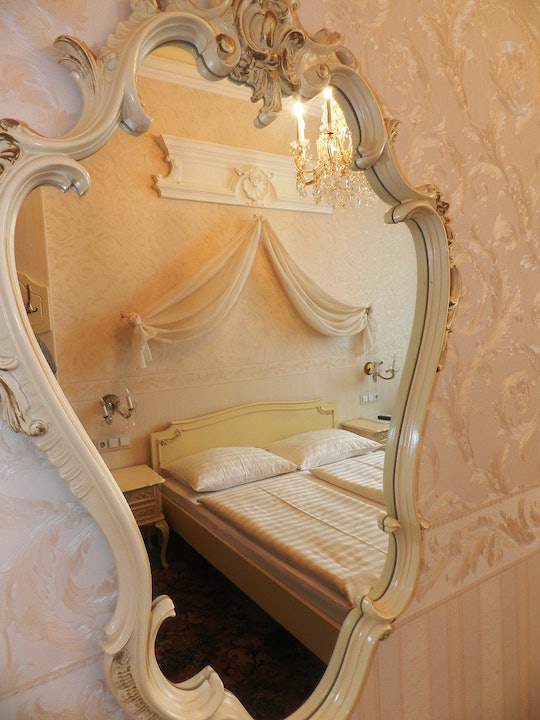 Why Is A Mirror Called A Looking Glass? The New 'Alice' Film Asks Deep Questions

Early mirrors were made by Egyptians and Greeks from predominantly polished bronze and have been around nearly as long as humanity itself. With the release of the new Alice in Wonderland installment, Alice Through The Looking Glass, audiences might be interested in know why a mirror is called a "looking glass."

It's based in the history of mirror making and dates back to Francis I, who, while the ruler of Mantua from 1382-1407, installed the first looking glasses throughout his Castle of San Giorgio. But "looking glass" is more than just a designation of the materials the mirror is made from. It's also a concept in human psychology that could potentially have been influenced by the use of the term in Through the Looking Glass.

Historically, the term "looking glass" is used to describe mirrors made from rock crystal, rather than bronze or another kind of metal. The Bienenstock Furniture Library thinks the term was invented along with the technology necessary to turn rock crystal into ornate, wall-hung crystal mirrors. These looking glass mirrors were rare and as expensive as jewels.

There's also another side to the term. Psychologist Charles Horton Cooley, who worked in the early 20th century, developed the psychological concept of the "looking glass self," which explains that people's individual personalities are formed in reaction to how they think society views them. That it's their interactions with others that form their selves, rather than the reverse (their internal selves influencing society). As an example, if humans watch themselves eat in a mirror, in the way others would watch them, it causes most people to eat less because they're accounting for other people's judgement of their behavior. People's internal interpretation of how society views them influences their behavior, and, in turn, their conceptual selves.

Through the Looking Glass was published in 1871, so it's possible that Alice's journey to Wonderland and her interactions with the Mad Hatter and the other characters versus her interactions with those in the real world were a kind of inspiration for Cooley's theory, which he published as part of Human Nature and the Social Order in 1902. Or perhaps simply the term for a mirror, "looking glass," was top of mind as a result of the popular success of the Lewis Carroll book.

Thanks to Carroll's book, "through the looking glass" has also gained a modern meaning as an idiom to mean going to a place where nothing is predictable, thanks to Alice's fantastical journey.

Here's an image from the latest Through the Looking Glass reboot, and, while it does look like Alice is jumping in and out of a fairly fancy mirror, I'm not sure if it's an official "polished crystal" looking glass.

More likely than not, the use of "looking glass" instead of plain old "mirror" by Carroll in his book is just a style choice. Looking glass does have a much more interesting ring to it than mirror, don't you think?