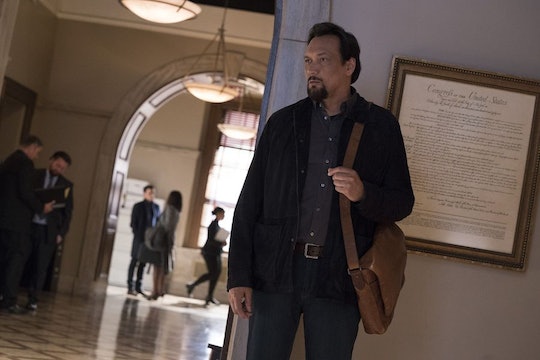 Annalise & Isaac Have A Complicated Relationship On 'HTGAWM'

How To Get Away With Murder is slowly (and infuriatingly) drawing out the details of the Season 4 flash forward, which shows Laurel in some sort of hospital setting toward the end of her pregnancy, decidedly un-pregnant. We know Annalise's new therapist Isaac (played by NYPD Blue alum Jimmy Smits) is there, but we don't know why. Just before Isaac starts intake with a new patient (who turns out to be Bonnie), we hear him calling Annalise "a trigger" in his voice-recorded patient notes. But why is Annalise a trigger for Isaac on HTGAWM? It could be one of a few things.

First, the session Isaac is taking notes on happens to be one in which he pointed out that Annalise might be throwing herself into the class action lawsuit in response to her crushing guilt over Wes Gibbons' death. We also know that Isaac is a former heroin addict while Annalise struggles with alcohol sobriety, although it's not necessarily unusual for former addicts to become addiction counselors. It seems a little too simplistic to assume that he meant her addiction was a trigger for his. What seems more likely, based on the session, is that Isaac and Annalise share a sort of workaholism to avoid their problems, and in the process of running themselves ragged, they set themselves up for relapse. Isaac had a super difficult time pushing past Annalise's defense mechanism of talking about her work instead of talking about herself. Perhaps Isaac finds himself getting over-invested in his patients the same way Annalise gets over-invested in her clients.

The other possibility is that Wes' death somehow triggers Isaac, since he only brought up the concern once Annalise showed signs of lasting damage after his murder. It's possible that Isaac experienced a tragic death of a loved one — I'm thinking overdose or suicide when he was still using — and that he still feels guilty about it. Or, maybe Isaac had a patient die, which Annalise's teacher/student relationship with Wes reminds him of, and her situation triggers him to feel guilty for failing someone in his care.

We don't really know the extent of Isaac's criminality from his days of heroin abuse, but it definitely feels like he's involved in something shady, either against Annalise, or against Laurel and her baby in the flash forwards. So there's also the question of what Annalise will trigger him to do. Is it just that she could trigger him into using again? Or might she trigger him into a bigger pattern of destructive behavior that involves hurting more people?

The fact that Bonnie shows up right in the middle of Isaac mentioning Annalise as a trigger on a recording also makes me think that HTGAWM is setting up another tape heist. It wouldn't be the first time the show has leaned on the plot device of stolen recordings and Bonnie seems perfectly capable of posing as a patient to swipe a therapist's voice notes. But if that is what the show is setting up, then why? Maybe Bonnie wants to find out what Isaac's intentions with Annalise are. Maybe she thinks Annalise talked about why she let her go in therapy and Bonnie's combination rabid insecurity and inflated sense of self leads her to swipe Annalise's file in an effort to get to the bottom of her firing. Whatever's happening here, Isaac definitely feels like a figure we should be wary of moving forward.