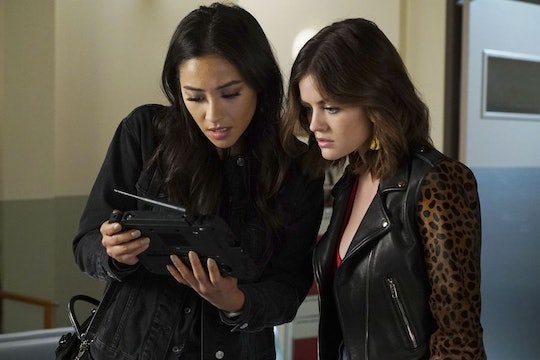 Aria Is Keeping A Big Secret From The Liars On 'PLL'

Fans have been hoping one of the Liars is actually A.D. for a while and now it looks like they may just get their wish. Kind of. At the end of "Power Play," A.D. purposefully skipped Aria's turn in the game as a way of giving her the chance to prove she's ready to join the "A" team. Based on the preview for the next episode, it looks like Aria is willing to play along, but why is Aria working with A.D. on Pretty Little Liars? Unsurprisingly, it looks like she has a big secret she'd rather not have her friends or Ezra find out about it.

Back when the Liars discovered Mrs. D's lair, it was discovered that she had files on all the Liars — but Aria's was missing. It turns out A.D. had it and what's inside is Aria's darkest secret. But what is Aria hiding and is it really so bad that she's willing to betray her friends because of it? It surely looks that way. Many fans have theorized what the secret could possibly be, but of course no one really knows for sure just yet.

It's possible Aria spent some time in Radley, like almost everyone else in Rosewood. Maybe Aria never even went to Iceland with her family but instead was actually in Radley the whole time and that's what A.D. is now holding over her head. If that is the case, one has to wonder why Aria was in Radley and why she's been keeping it a secret from the other Liars for all these years.

Unfortunately, mental illness is still a topic many people don't feel comfortable discussing due to the unfair stigma around it, but Spencer has spent time in Radley as well. Even if Aria didn't feel comfortable talking to the others about it, she and Spencer have always been close. They're called "Sparia" for a reason. It seems strange that Aria wouldn't share this secret with Spencer, which means it may be something else entirely.

So what did Aria do? It's possible that whatever was in her file actually happened during the five-year time jump. The Liars didn't discover Jessica's cellar until after that. Maybe Aria's big secret actually comes from something that happened recently and there's already one thing that happened during those five years that she's been keeping from her friends: dating Jason. Could these two secrets be connected somehow? It certainly seems plausible.

Thankfully, fans won't have to wait too much longer to find out the truth. Pretty Little Liars airs on Tuesdays at 8 p.m. ET on Freeform.