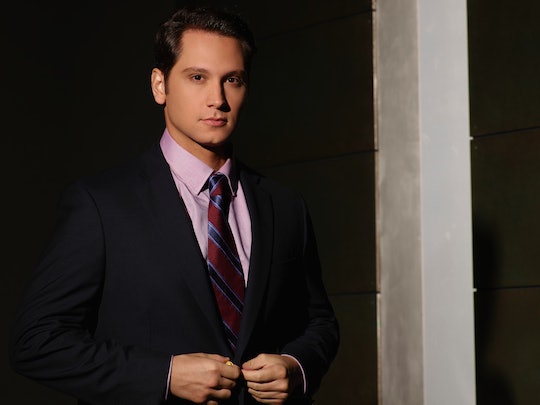 In the flash forward at the end of How to Get Away with Murder Season 4 Episode 5, Asher was shown sobbing in a cell. But why is Asher in jail on HTGAWM? It seems like he's a possible suspect in the still-unknown crime that's looming on the horizon. It may not be entirely clear what happened in the offices of Caplan and Gold — aside from the fact that it was super bloody — but now it's a definite that Asher was involved in some way. It might seem hard to believe, but Asher did totally run someone over once before, so he's definitely capable of some nefarious behavior.

There are two crime scenes in the flash forwards this season: Annalise's hotel room and the Caplan and Gold offices. The state of both locations prove something horrific has gone on, though the show is still shying away from providing any concrete details. Part of the law office was cordoned off where there was a spatter of blood on one of the glass walls and another puddle of blood directly underneath it, almost as though someone was shot. Oliver is the only known witness to the crime at the moment, and now there's only one known suspect. When Bonnie asked the cops about the perpetrator, she was told they were in jail, which is when the episode cut to Asher crying it out behind bars.

Though Asher seems to be careening towards an unhappy future, there is one small thing fans can comfort themselves with: at least he isn't dead. When the flash forward in Episode 3 showed a traumatized Michaela covered in blood and questioning whether a mysterious "he" was dead, fans immediately jumped to the conclusion that Asher might have died. Now viewers know that he is alive two weeks in the future, but he's also in some serious trouble.

In the present, everything seems to be going just swell for Asher. Even though he isn't quite adjusting to Michaela's new late night schedule of work and corporate sabotage, there aren't any signs that he is about to be arrested for a violent crime. He is still the same quippy Asher as always, helping Frank out with his LSAT preparations. But when Michaela came home one night still whispering to Laurel on the phone about their plot to take down Antares, it seemed like Asher was cottoning on to Michaela's secret-keeping.

Those two plots could be headed for a collision course. Michaela and Laurel are approaching dangerous territory as they try to expose Laurel's father and avenge Wes' death. There is no way they are going to get out of this unscathed, especially since Michaela is snooping around on her boss' computer and Laurel's father made it obvious that he isn't above ordering a hit on someone she cares about. Asher is in the dark for now, but if he begins to openly question Michaela, then he might find himself roped into what's going on.

Connor has been missing from the flash forwards so far, which makes it easy to believe he's one of the victims. But I think it's possible that one of the hitmen Laurel's father keeps on payroll showed up at Caplan and Gold looking to put a stop to what the girls were doing. If things got out of hand, then Asher may have killed the man in an attempt to protect Michaela, though the entire situation obviously will leave Michaela psychologically scarred.

But that's just one theory. There are so few details to go off of right now that a myriad of different situations are possible. Asher was jailed as a suspect in a violent crime, but until more questions are answered, it's all uncertain.