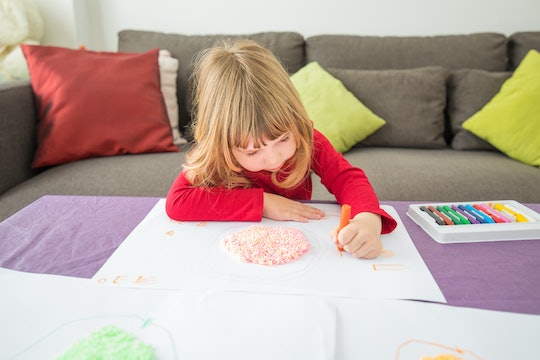 Science & History Explain Why It's So Rare To Be Left-Handed

If you're right-handed, then the world of left-handed people is probably something you seldom think about. But lefties do make up a small and sometimes misunderstood segment of the population. Why is it so rare to be left-handed, anyway? Lefties are kind of tricky to understand.

For starters, there is a genetic component to handedness, or which hand you prefer to use. But because geneticists are still trying to figure out which of the 40 different genes affect dominant hand choice, the exact way genes come into play is still unknown, according to the BBC. But it does look like handedness is inheritable. For example, the children of left-handed parents are more likely to be left-handed than the general population, according to the Genetics Home Reference of the U.S. National Library of Medicine. But left-handedness isn't guaranteed. In fact, it's still most likely for the child of a left-handed parent to turn out right-handed, as further noted by the Genetics Home Reference. Because only about ten percent of the population is left-handed, as noted by the Huffington Post, it looks like lefties are destined to be something of a rarity.

So if genes aren't the full picture, then does a person's environment affect their handedness? The answer is a solid "probably?" It can certainly be unlearned. In China, for instance, less than one percent of surveyed students report being left-handed, according to a 2013 article in Endeavor. It's likely that left-handed tendencies are discouraged in these children, who learn to use their right hand as the dominant one, they explained.

This favoritism for the right hand is nothing new, either. Historically, left-handed people were sometimes viewed with suspicion or straight-up considered evil. “In the Middle Ages, for instance, the left-hander lived in danger of being accused of practicing witchcraft,” according to a 1969 article in Time. “The Devil himself was considered a southpaw, and he and other evil spirits were always conjured up by left-handed gestures.” And for some people at least, the superstitions associated with left-handedness are still alive and well. If you type "is left-handedness" in Google, one autocomplete phrase includes "is left-handedness a sin". Plenty of sites exist that address the question seriously.

Even once the "evil" connotation was dropped a little, left-handed kids were still basically treated like dirt for many decades. For instance, teachers would punish students for using their left hand in class, or even physically restrain the left hand during writing exercises, as noted in The Tartan. Even something as small as hand preference was considered a defect until not too long ago.

Now, at least, there are plenty of articles and resources for teachers who want to help their left-handed students. And most adults are generally cautioned against forcing a left-handed child to use the right hand, as noted in the Better Health Channel. Chances are, the attempt would only lead to a lot of unnecessary frustration for everybody.

Although they're no longer viewed as sinister defects by most of the world, lefties are still a bit overlooked in some ways. Even the simplest tools, from scissors to can openers, are generally engineered to fit right-handed people. I mean, have you ever watched a left-handed person try to write with a gel pen? It's a messy affair.

Thankfully, though, there is more representation for people in the left-handed community. Sites such as Anything Left-Handed offer an online space for left-handed people to share their experiences. Plus, entire stores devoted to selling left-handed tools, such as Lefty's the Left Hand Store, offer up kitchen gear, stationary, and loads of scissors for the southpaw set. Although their hand preference may not be totally understood by science yet, left-handed people are at least gaining more recognition.