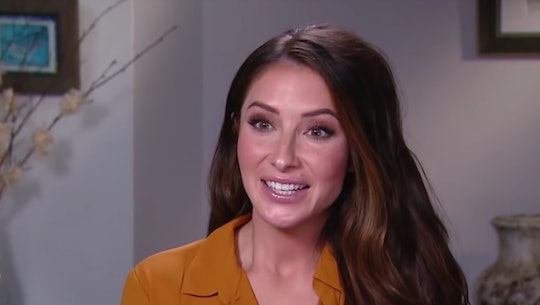 There are new changes coming to the cast of Teen Mom OG. On Monday, cast member and mom of three, Bristol Palin, announced on Instagram that she would be not be appearing in the new season of the reality show. So, why is Bristol Palin quitting Teen Mom? Although fans might be sad to see her go, they're respecting her decision to move on with her life.

In a post on Monday, Palin revealed that she would not be continuing to film Teen Mom OG. The 27-year-old (and former teen mom) only appeared on one season of the show, which began airing in October 2018. Throughout the season, viewers watched as she publicly talked about her relationship struggles with ex-husband, Dakota Meyer, showed how she co-parents her 10-year-old son, Tripp, with ex-boyfriend, Levi Johnston, and continued to parent her two children with Meyer, 3-year-old daughter, Sailor, and their 1-year-old daughter, Atlee.

Although she let fans watch this intimate part of her life, in the post, Palin explained that reality TV just isn't the right fit for her or her family. So, she will be leaving the show. "Teen Mom OG wasn't a fit for me, it took away my peace...and honestly — my peace has a price tag that no one but God can afford," Palin wrote.

"Money doesn't impress me, I don't entertain b.s, and walking away from this show allows God to rebuild me (and my little fam) in the right direction."

As a mom of three, Palin knows what is best for her family. And if filming a reality show isn't it, then she has every right to not want to be in front of the cameras. Palin's former Teen Mom OG cast members are in full support of this major decision.

"Wishing you all the luck and blessings," Cheyenne Floyd, another Teen Mom OG cast member, added.

And Palin's fans are just as happy for her, taking to the comments of the post to share their love to the mom.

"Too much class and the perfect amount of sass," one commenter wrote. "Go where God is leading you. You are radiant."

"Going to miss seeing you every week, but I'm so glad you're doing what's best for you and your family!" another commenter added.

Unfortunately, Palin's big announcement couldn't come on a worse day — she posted her news on April Fool's Day. But, she explained in the comments that she is completely serious about her announcement.

"Shoot people are going to think that — but 100 percent not a joke, HA," Palin clarified.

This isn't the first time Palin has admitted that she wasn't happy with appearing on Teen Mom OG, according to USA Today. This past December, Palin took to Instagram where she shared her thoughts about her portrayal on the show.

"No matter how bad Teen Mom tries to portray my 'life'....my babies, my family, my close friends — they know the TRUTH. I'm a pretty great mom, work my a** off, show up, and hustle every day to give my kids a pretty great life," Palin wrote at the time. "MTV doesn't want to talk about faith, show work ethic, or juggling three kids alone, they don't want to show the humble process of starting over after a divorce, building a career, or any real life issues."

Although fans will be sad to see her leave the show, it's clear they're happy to see her choosing what she feels is best for herself and her family.