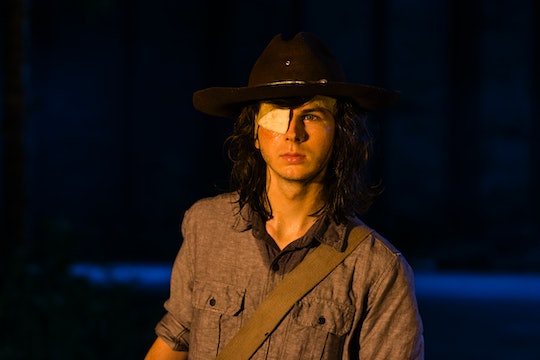 Few moments on The Walking Dead were as shocking as the final few of the Season 8 midseason finale, where it was revealed that Carl Grimes had suffered a walker bite and was not long for this world. Many viewers thought Carl would be here for the long haul, protected by the narrative so he could take up Rick's mantle one day in the future. So why is Chandler Riggs leaving The Walking Dead? There has to be some explanation for such an unexpected development.

There was speculation that Riggs was departing so that he could focus on college, but it seems like the decision wasn't motivated by external factors at all. It was a storytelling choice. Rick has been so focused on killing Negan after everything he did, and it seemed like the show needed a way to push him in the other direction. Apparently, Carl's sudden death will be all the inspiration Rick needs.

Despite the fact that they have dispatched with many cruel antagonists before (and Carl was all in on the plan to kill Negan previously), now keeping Negan around means that the other characters are going to have to change their minds — and fast. Carl's imminent death might make him forgiving enough to pass the lesson of mercy onto Rick.

At least, that's the assumption one makes based on Chandler Riggs' exit interview with The Hollywood Reporter. Riggs explained that leaving the show wasn't his decision, but instead a story-related choice made by former showrunner Scott M. Gimple. According to Riggs, the decision came about this way:

In the comics, Scott was trying to figure out why there was a hole between Rick slitting Negan's throat at the ed of the "All-Out War" arc and then there's the time jump and Negan is alive and in prison and Rick didn't kill Negan. Scott was trying to figure out how to bridge the gap between Rick not wanting to kill Negan and Rick also really wanting to kill Negan, which he does right now [in the show's story]. Scott's way to get around that was to make Carl this really humanitarian figure and person who could see the good in people and see that people can change and not everyone out there is bad. That's what Carl's talk to Rick was in this episode: There's no way that they can kill every one of the Saviors and not everyone is a bad person and there has to be some way forward than just killing people.

Riggs went on to say that Episode 9, which ushers in the second half of Season 8, will feature Carl's last moments. He'll use the time he has left to "teach Rick as much as he can about what he's learned and trying to convince Rick to not kill every single Savior because there's still good people out there." Carl is dying to impart some wisdom to Rick, even though it's a lesson that Rick is probably well aware of. After meeting Ezekiel, Jesus, and countless others, he knows good people are out there. Negan, however, isn't one of them.

It's clear that Riggs didn't make the choice to leave the show. Instead, it was something the writing team (and Gimple specifically) felt would best serve the story going forward, regardless of how it might not fit with Carl's characterization up to this point.

Fans have already expressed trepidation about the decision to kill Carl, but there's always the chance that when the show returns with "Honor" on Feb. 25, they'll change their minds. It just depends on how effectively The Walking Dead handles the death of one of its most important characters.