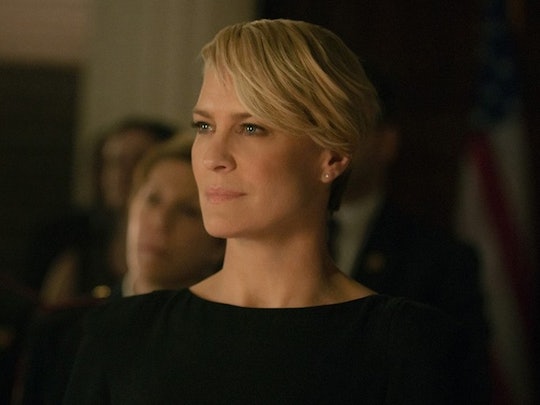 Why Is Claire Running For Office? 'House Of Cards' First Lady Is Making A Big Move

Despite the fact that the end of Season 4 of House of Cards left one big question mark on the status of Frank and Claire's union, Season 4 begins with a push for the polls — and it's not exactly just Frank's bid for the White House that people are concerned with. Though the First Lady's ambitions for office have always been pretty obvious, when we first spot Claire minutes into the first episode, she's in Texas gearing up for a run in the state's Congressional election. But why is Claire Underwood running for office? House of Cards' First Lady is in Dallas, flexing her professional manipulations on the Jones women. Even though we know where Claire is, we still don't know exactly why she's there, and beyond that, why is she so interested in a seat in Congress? (Season 4, Episode 1 spoilers ahead.)

The way Season 3 ended should provide a pretty clear explanation as to why Claire is eager to break free of Frank's shadow. She is, in every sense of the word, the driving force behind his campaign and his capabilities. I don't mean to play into the cliché, but Frank Underwood, though devious and dangerous on his own, would be just half the man he is today without Claire Underwood. And to be 100 percent clear: I don't think any of us should be shocked or even remotely surprised that Claire Underwood might see herself as politically fit to hold public office, or have ambitions that stretch beyond the wants of her husband. To do think that would be largely unfair and an insult to Claire Underwood.

Throughout the House of Cards storyline to date, Claire's professional ambitions have either taken a backseat to her husband's or worked in tandem with his to achieve some greater good (or, in their case, some greater evil). Every move has been a conscious effort to get Frank Underwood to the White House, and once he got there, he made sure to put Claire's career on the back burner. Sure, Frank made exterior strides to get Claire the position she wanted — he promoted her ambassador to the U.N. after the Senate rejected her application — but he put no political weight behind his wife, his partner, and the most valuable asset he's got in his corner. And he did little to ensure that she felt supported and capable in her role. Her job became the nightlight for Frank's journey to infamy, and it became clearer and clearer that her husband could frankly give a sh*t about the things that were important to her, or the issues that he should pay attention to. So if you're a little surprised that Claire's moved on, don't be.

The move to Texas not only creates physical space between the estranged couple, it also builds professional separation as well: If Claire can win Texas — her birth place — on her own without Frank's influence (or, more accurately, without his meddling), she'll have moved beyond the span of his shadow and into her own political career. Not only would that serve her career well, it'd serve public perception of her fabulously too.

Even though we don't know the exact reason why Claire is running for office — she's never struck me as someone who cares deeply about democracy and the democratic process — she is very much someone who loves power. So a seat in Congress (and if she gets what she wants, eventually a spot in the governor's mansion) would give Claire Underwood the very thing she wants: power and control.