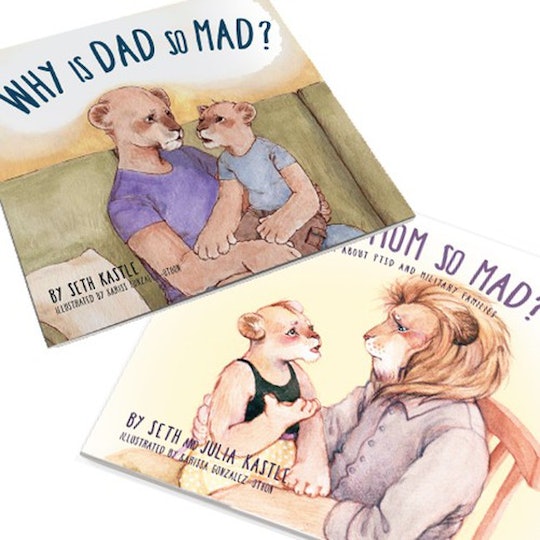 Sadly, many military families have experienced the affects of a parent coming home from serving their country with combat-related Post Traumatic Stress Disorder (PTSD). Why is Dad So Mad? and Why is Mom So Mad? are picture books aimed to help children dealing with a parent who suffers from PTSD, specifically from their experience in the military.

Seth Kastle, a father and Company First Sergeant who spent 16 years in the Army Reserve, was compelled to write the first book after unsuccessfully trying to find a children's story that could share his struggle with PTSD in a way his daughters would understand. Deducing that many military families just like his could potentially benefit from this useful tool, Kastle launched a Kickstarter campaign to help raise the necessary funds to complete Why is Dad So Mad?. Turns out, he was right. The campaign was a huge success, and Kastle was able to hire an illustrator, Karissa Gonzalez-Othon, and arrange for the first book to go into production.

In an interview with Romper, Kastle says, "I wrote the first book because I needed a way to explain to my kids why I am the way I am, and at the time, there was very little available to explain this. I was in Iraq and Afghanistan when I was in my early 20's, and I didn't have kids until I was almost 30. Who I am post-war is all they know. I needed a resource to start this conversation, so they knew the way I reacted to some situations wasn't their fault, and despite this, I loved them more than I could explain."

Why is Dad So Mad?
Tall Tale Press/Amazon

Written for children ages 3-8, Why is Dad So Sad? is about a family of lions whose father suffers from PTSD. Told from the mother and children's point of view, it covers some of the symptoms of PTSD that dad is experiencing, like anger, forgetfulness, sleepless nights and nightmares, by explaining how he is affected by them. The moral of the story, and one that is evident throughout the book, is that even though Dad gets angry and yells, he still loves his family more than anything.

In Why is Mom So Mad?, which Kastle co-authored with his wife, Julia, also a combat veteran, this time it's mom who is battling combat-related Post Traumatic Stress Disorder (PTSD). Kastle tells Romper, "As little as there was in children's books for dads that struggled with PTSD, there was nothing for mothers in the same boat." Asymmetrical warfare has blurred the lines of women in combat roles, and female veterans are impacted through current conflicts more than ever. With Why is Mom So Mad?, now there is a story that shares how symptoms of PTSD, like anger, forgetfulness, sleepless nights and nightmares can affect mom after she comes home. And even though she may get angry and yell, it's not her children's fault: she loves them more than they could ever know.

Why Is Mom So Mad?
Tall Tale Press/Amazon

In the end, children just want to know that they're loved, right? And we can show it in the simplest of ways. But when a family member is struggling with a disorder like PTSD, they may take any aggression they're feeling out on their children, however unintentionally. Books like Why is Dad So Mad? and Why is Mom So Mad? help to shed light on this issue, and to aid children's understand of how their parent may have changed, but above all, how loved they are regardless.

To learn more about Kastle, his family and their book series, you can watch a touching interview that aired on NBC Nightly News. And if you or someone you know suffers from PTSD, there are many resources and support groups that are available and want to help; head to the Wounded Warrior Project to find out more.