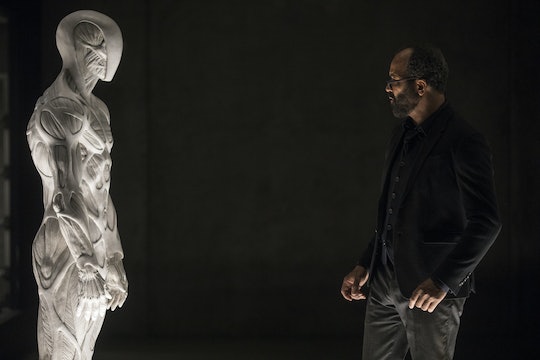 Delos' Secret Project On 'Westworld' Could Prove To Be Downright Terrifying

Bernard may have thought the most shocking secret he'd come across in Westworld was that he was a host, but the premiere of Season 2 proved that he was even more in the dark than he realized. While escaping the massacre, he and Charlotte took refuge in a secret laboratory populated with drone hosts, faceless androids there to do Delos' bidding. That involved collecting video of the guests' experiences from the hosts' brains and taking the guests' DNA. But why is Delos collecting human DNA on Westworld?

Fans already have plenty of theories, but none of the options are exactly altruistic. It seemed obvious that the project was under wraps, because Bernard (who worked so closely with the park's creator, Robert Ford) had no idea it was going on. Taking video and DNA from guests appeared to be something Delos was keeping from those who worked on the more creative aspects of the park. If it was so confidential, then it couldn't be good. Delos is up to something.

Charlotte wasn't interested in giving Bernard answers, but that doesn't mean viewers can't speculate about what Delos is doing. There are a few ideas that have become popular with the fans, and they all seem like plausible directions for the show to take.

When asked about the drone hosts in an interview with Entertainment Weekly, showrunner Jonathan Nolan discussed how they related to Delos' project. "As we talked about in the pilot, the park is one thing for the guests, it's something completely different for its shareholders and management," he said. "There is an agenda here that Delos has undertaken for a very long time."

So what kind of agenda could Delos have with its very rich, very high profile guests? One theory could be blackmail. Visitors to Westworld run wild while they're there, engaging in all kinds of horrifying acts for the sheer fun of it, and that could give Delos a lot of information to work with. However, it's hard to imagine blackmail on that scale could actually stay quiet for the 30-odd years the park was running. But that doesn't explain the DNA.

Reddit user eneskristo had an idea, however, writing, "So they're collecting the dna of every park goer, in a park where you need 30k a day to attend? I smell replacing rich elite people with hosts and Delos ruling the world [sic]." That's certainly a popular idea, especially because the original Westworld film that inspired the series had a sequel called Futureworld where that was exactly what happened. In Futureworld, Delos collected guest DNA so that they could clone and eventually replace them. Since it's a part of the source material, it's very possible the HBO adaptation will follow suit.

But another redditor, Hobbes09R, came up with a conflicting theory. They didn't think it was as simple as cloning, especially considering how much effort went into making hosts that were duplicates of real people, like the copy of Ford's family made by Arnold back in Season 1. Hobbes09R wrote:

It might be something of a tech access, actually. Notice how they needed a DNA scan just to safely enter the complex. I don't think that's a throwaway bit. It might be that DNA is something of a password protection we use in the future so nobody gets at our data. Now imagine a company manages to break past that protection for the most influential people in the world.

Perhaps Delos is actually mining information from its guests. Considering how much money it takes to run the parks, it would definitely be lucrative if they could use them to find out their core demographics' deepest desires and get a look at their data. Plus it's something they'd absolutely have to keep quiet, which explains why it's all so hush hush.

Westworld might be playing coy about Delos' plans, but it's clear whatever they're doing is going to be a big part of Season 2.