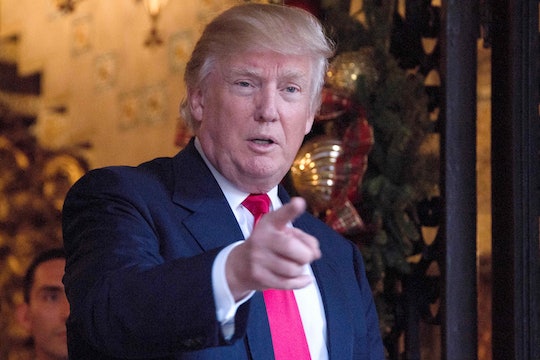 On Wednesday, The Washington Post obtained a disturbing request from the Trump transition team made to the State Department, seeking information regarding all existing gender equality programs, activities, staffing, and funding at the State Department. Um, what? Why is Donald Trump requesting info about gender equality programs and staffing? The truth is, no one really knows — and Trump and his transition team aren't talking, either. The Trump transition team did not immediately respond to Romper's request for comment — a move on that's been par at pretty much all of the major news outlets on Wednesday.

The request for information was made in what's known as a "Flash Transition Tasker," on official request that basically means "stop what you're doing and do this now" as part of presidential transition efforts. Specifically, the Trump transition team requested that the State Department turn over all information on existing programs and staffing that "promote gender equality, such as ending gender-based violence, promoting women’s participation in economic and political spheres, entrepreneurship, etc." While the request did not seek out the names of officials working on such programs and activities, it's a chilling request all the same.

Only two other Flash Transition Taskers have been sent to the State Department by the Trump transition team previous to Wednesday's, according to The Washington Post: one on counterterrorism, and the other on violent extremism. Weird how "gender equality programs and staffing" comes up as now the third most important piece of info that the Trump team wants the State Department to turn over, don't you think?

Wednesday's request comes on the heels of an equally alarming request made by the Trump transition team last week, seeking the names of Energy Department officials who worked on specific climate change meetings. (Um, environmental McCarthyism much? )The Energy Department refused to honor the request. Even while this latest request on gender equality programs at the State Department didn't seek out information on specific names, it begs the question why Trump needs any of this information in the first place.

There's lots to speculate here. I'll play devil's advocate: Maybe Trump is looking for something his 35-year-old daughter Ivanka — who will be coming to Washington with her dad — can take the lead on while she's at the White House? Ivanka became the face of her father's childcare policy at the Republican National Convention in July, and was largely been the driving force in reaching out to women voters over the course of his campaign.

But the nature of Trump's request doesn't exactly imply that he intends to make gender equality a priority in his administration, especially when he's seeking information about funding. It's rare that a department is asked to provide details on how much they're spending so that higher ups can throw more money their way: It's usually the opposite. Unfortunately, we have no way of knowing what Trump plans to do with this information, and why it was needed so urgently — because for once, he's not talking.