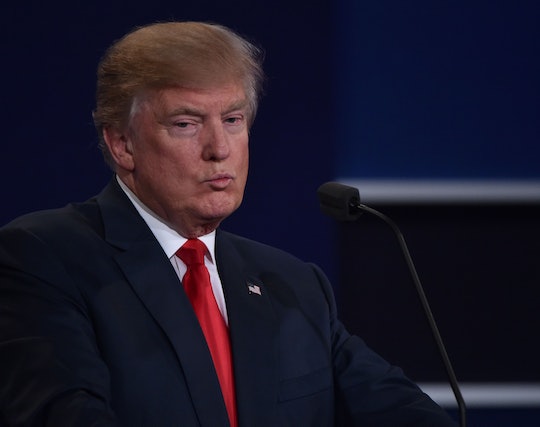 Why Is Donald Trump Whispering At The Last Debate? The Internet Is Speculating

The word "whisper" isn't usually associated with Donald Trump, who is known for being pretty loud and bombastic on screen and off. But at the final debate of the election season the candidate seems to have taken on a more controlled tone. So why is Donald Trump whispering at the last debate? The internet is speculating and has its theories.

Trump has been a public figure for a long time, and for all the years he's spent in the boardrooms of Trump Tower, he's had more than a few experiences on TV. That being said, back when he was hosting The Apprentice, he had a character to play. That character seemed to be a much larger-than-life version of the Donald Trump that world has come to know over the past year. He needed to be intimidating to contestants, and he's no doubt spent most of his professional life honing a persona that says, "I'm the boss." That has probably involved lots of loud talking, if not yelling. So it's not really all that surprising that his foray into politics has brought those traits out. But do they always work for him? Maybe yelling when he's at a rally or a campaign event works out okay, but not in a studio with a very sensitive microphone.

Although, he hasn't had the best luck with microphones either. The most likely story is that his campaign told him to turn it down a notch or two so that he wouldn't obliterate the sound system with his booming voice and to help him cultivate a more calm, controlled, presidential look. One of the main topics of the final debate was each candidate's level of "fitness" to serve as president, and a large part of that is being a good communicator.

Psychologists have actually studied whether yelling is a good communication strategy, and while it serves a purpose (like alerting others to danger) it can also convey certain things about the person doing the yelling. Psychologist Jim Hutt wrote on GoodTherapy that people often yell when they feel helpless, especially when interacting with children. They may feel cornered, or insecure about how to handle the situation. He also pointed out that people who are reactive and quick to anger may not need much prodding to get their voices raised.

Although the internet had fun speculating about whether or not it was Trump's turn to have a cold (after he chastised Clinton a few weeks ago when she had pneumonia) and the continued arc of memes centered around speculations of drug use, in all actuality Trump's "whispers" are probably just his attempts to speak at a normal volume.