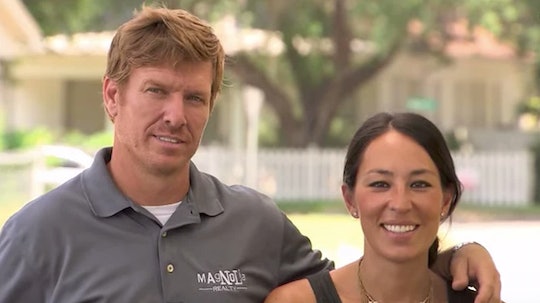 'Fixer Upper' Is Ending, & Here's Why

After five years of taking houses in need of serious repair and turning them into much lovelier living spaces, the HGTV series Fixer Upper is coming to an end. Hosts Chip and Joanna Gaines are stepping away from their HGTV series. But why is Fixer Upper ending after Season 5? In a statement released by the couple on Tuesday, they explain why they are parting from the series.

It is with both sadness and expectation that we share the news that season 5 of Fixer Upper will be our last. While we are confident that this is the right choice for us, it has for sure not been an easy one to come to terms with. Our family has grown up alongside yours, and we have felt you rooting us on from the other side of the screen. How bittersweet to say goodbye to the very thing that introduced us all in the first place.

However, just because Fixer Upper is coming to an end doesn't mean the Gaines are ending their home renovation careers. They'll just be continuing it offscreen while focusing on things that are a little more personal. They decided they needed a break so that they could give more time to their family and other businesses.

A statement from HGTV made it clear that the network understands the Gaines' decision, as well. "We've all been on an incredible journey with Chip and Joanna for five years. It takes a huge amount of time and creative energy to make a phenomenal series like Fixer Upper," the statement read. "We understand their decision to spend more time with their family. Like all of their fans, we want only the best for them and they know they will always have a home at HGTV. Fans can expect that the upcoming season of Fixer Upper will be the best season ever and we can't wait for it to hit the air later this year."

The network makes it sound as though a continuation of the show is possible sometime in the future. If one day the Gaines decide to return to the world of televised home renovation, they may still have a place at HGTV. But it isn't a guarantee that they would want to, especially now; it's so soon after their decision to end the show that there's no telling what might happen in the next few years.

In the blog post on their Magnolia Market website where Chip and Joanna revealed their decision, they delved into their reasons for leaving the show and tried to dispel any rumors that might arise. "We have poured our blood, sweat and tears into this show," they wrote. "We would be foolish to think we can go and go and fire on all cylinders and never stop to pause. Our family is healthy and our marriage has honestly never been stronger. This has nothing to do with a fraudulent skincare line or anything else you'll inevitably read. This is just us recognizing that we need to catch our breath for a moment."

The mention of a skincare line refers to speculation that Joanna would be launching one of her own, which she has denied on several occasions. In addition to continuing their reno work, the Gaines will presumably also keep up with their brand partnerships with Target and Bed, Bath & Beyond. Aside from that, their next move is up in the air. Fans of the pair will just have to stay tuned to see what they do now that their time on Fixer Upper has come to a close. Chip and Joanna might not know what's coming next, but it's sure to be something exciting.

More Like This
Take An Exclusive Sneak Peek At 'Bluey' Season 3 Before It Lands On Disney+
The White Lotus Is The Perfect Thrilling Treat For After The Kids Go To Bed
What Parents Need To Know About Hulu's Predator Prequel Prey
10 Cozy, Romantic, & Drama-Filled Shows To Watch If You Love 'Virgin River'