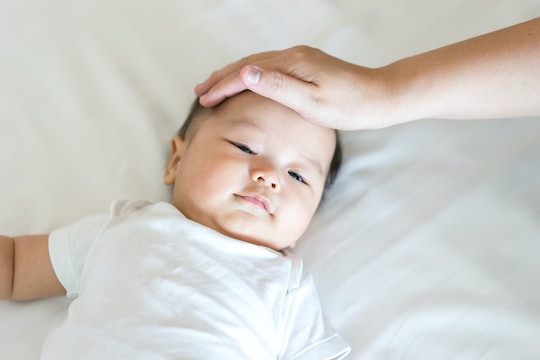 Why The Potentially Deadly Flu Outbreak Is Especially Dangerous For Babies

It's flu season in the United States, which usually means nothing more than a flu shot for the family and some extra diligence in hand-washing. This year, however, there's one strain of influenza that's sending a higher number of people to the hospital than usual, and it's especially important for parents to be aware of it. Influenza A strain H3N2 can be particularly hard on babies and those over 65, and it's the strain that's shown up in 83 percent of reported cases so far. But why is H3N2 so dangerous for babies in the first place?

A reported 13 children have already died of the flu in the United States alone this season, according to The Weather Channel. Children under 2 tend to be at the highest risk of flu complications, although all kids under 5 are generally at a higher risk for developing serious complications, according to the Centers for Disease Control and Prevention. Those with conditions like asthma, diabetes, or nervous system disorders also have a higher likelihood of coming down with complications related to the flu.

But just why do babies and kids face a higher risk? Dr. Claire Bocchini, an infectious disease specialist at Texas Children's Hospital, told CBS News that it comes down to kids' growing bodies. "Their lungs, their immune systems are still developing, especially the younger ones, and so they have a lot more complications," she said.

Children's higher risk of contracting complications of the flu is compounded by the fact that H3N2 is simply hitting everyone hard — since it's spreading easier than other strains have in the past. This year's flu vaccine is estimated to only be about 32 percent effective against H3N2, according to the CDC, since H3N2 tends to mutate and doctors need to predict the prevailing strains for the season months in advance.

Despite the flu vaccine's lower effectiveness this season, it's still worth it to get it, doctors say. "Even if you get the flu, with a vaccine, it's more mild, you're less likely to go to the hospital and you're contagious for a less amount of time. It's not too late to get the vaccine for this season," Dr. Jennifer Layden, chief medical officer at the Illiniois Department of Public Health, told CBS News.

On top of that, doctors recommend keeping kids from those who already have the flu and washing hands more frequently. If your child gets sick, keep them home to limit the spread of the disease.

The other thing to note, experts say, is that it's not the flu itself that tends to be dangerous for kids — it's the complications that can come with it, and that's where keeping a close eye and an open channel with doctors comes in handy. "The majority of people die not of the influenza but due to secondary bacterial infections," Dr. Peter Collignon, a professor of microbiology and medical doctor, told The Guardian recently. He continued:

Of the children who die after contracting the flu, they find golden staph as a complication in a lot of them. One of the things the flu perversely does is set up the throat to become ripe for bacterial infection. Death seems to especially affect those who got sick, got better, then got sick again.

Fortunately, those secondary infections can usually be treated with antibiotics. But parents need to be on the lookout for anything abnormal. "That’s where we need more research, and education, so that parents know if their child gets sick for a few days from the flu, then seems to get better and then worse, they should get their child treated," Collignon told The Guardian.

If your child gets the flu, there's no need to panic — but keep a careful eye on them and call your doctors if you see any symptoms out of the norm.