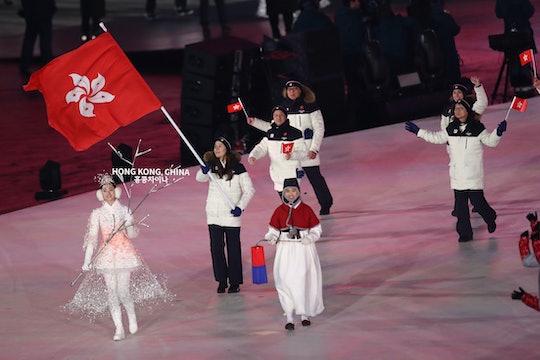 Why Is Hong Kong Its Own Flag At The Olympics? The Region Competes Separately From China

If you watched the opening ceremony of the Olympics live on Friday morning, you might have noticed that the athletes from Hong Kong marched behind a flag that looked different from China's flag. Why is Hong Kong its own flag at the Olympics, anyway? It actually has to do with the region's complicated history with China.

First, a very short, simplistic history lesson. Hong Kong is actually a special administrative region of China, leased back to the country from the United Kingdom thanks to a treaty signed in 1984, according to the Encyclopædia Britannica's website. The entire region was officially returned to China in July 1997, but Juan Antonio Samaranch, the late president of the International Olympic Committee, and other officials agreed that Hong Kong would be allowed to compete independently of China in all sporting events worldwide for at least 50 more years, The South China Morning Post reported. That includes the Olympics and this year's Winter Games in PyeongChang.

So technically, Hong Kong is allowed to compete as its own entity in the Olympics, and to proudly wave its own flag during the opening ceremony. China is still there too, of course, and its athletes use their own country's flag. But if an athlete or team from Hong Kong won a gold medal, officials would raise Hong Kong's flag, but the Games would play the national anthem of the People's Republic of China.

Hong Kong actually only has one Olympic gold medal to its name, so a scenario in which the Games raised Hong Kong's flag but China's anthem played during a medal award event has only taken place once. Lee Lai-Shan won a gold medal for windsurfing back in 1996, according to The Straits Times, but those were the Summer Games. Athletes from Hong Kong have won two more medals since, but didn't earn the top spot that would have found them standing beneath the region's flag as the Chinese anthem played.

There is only one athlete competing for Hong Kong in the 2018 PyeongChang Olympics. A United States-based student named Arabella Ng will compete in Alpine skiing, at just 16 years old. She is the first to represent the territory on snow, according to Reuters. The other five who came before her were all short-track speed skaters, and therefore competed on ice instead.

Not only did Ng get to march beneath Hong Kong's flag for the opening ceremony of the Games, she'll also be competing in a uniform for the region. The secretary general of the Hong Kong Ski Association, Samson Siu, told The South China Morning Post after Ng qualified for her spot as an Olympian:

The young athlete is definitely feeling the pressure when it comes to competing for Hong Kong. Ng told The South China Morning Post in another article:

I see these Games as a huge opportunity and learning experience for the future. I’m still very young and will be one of the youngest racers in PyeongChang so I don’t really have any big expectations. But there’s definitely a little bit of pressure as I want to do my best on the day for Hong Kong.

And who could blame her for feeling nervous, as the only Olympian there representing the special region. Fortunately, it sounds like if Ng qualifies for the Olympics next time, she won't feel so alone. The Hong Kong Ski Association is reportedly using her participation in PyeongChang as a sort of test for the 2022 Winter Olympics in Beijing, when it hopes to send more athletes. That means in just a few years, when Hong Kong is presented at the opening ceremony, there could be a lot more faces proudly marching beneath the territory's distinctive and historic flag.

The Olympics aren't the only place in which athletes from Hong Kong compete for their region and their flag. In fact, they've actually faced China in other sports competitions — like two football qualifying matches for the 2018 World Cup in Russia.

But the Olympics are certainly one of the most-watched events on the world stage, and the games allow for the whole world to see the people of Hong Kong represent the region as its own, individual place with its own identity — and yes, its own, vibrant flag.