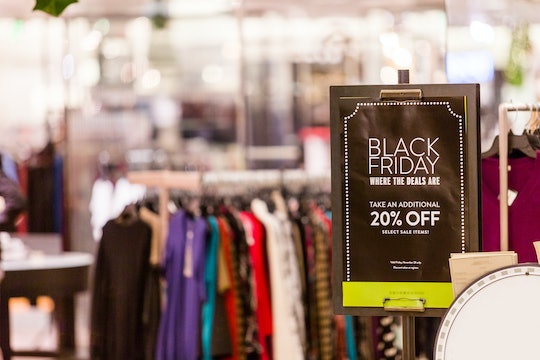 Why Is It Called Black Friday? The Story Behind The Shopping Phenomenon

The day after Thanksgiving, also known as Black Friday, has almost become as big of a holiday as Turkey Day. Kicking off the Christmas shopping season, stores slash their prices offering some of the best sales and deals of the year, and consumers come running. We've all heard the horror stories of stampedes, and we've all suffered the annoyance of waiting in a checkout queue that wraps around the block. But it's all worth it for the savings, right?

But why is Black Friday called Black Friday? It's pretty clear to see how this phenomenon came about. Traditionally, the day after Thanksgiving marks the commencement of the Christmas season, and so it's also the first "official" day of holiday shopping. Pair that with the fact that most American's are off from work, and you've got some crowded malls. Retailers want to take advantage of this, so they offer doorbuster deals and flash sales to drive traffic, and before you know it you have a full-fledged holiday.

But how did this day of shopping observance get its name? Its newly started sister holiday, Cyber Monday, has a pretty clear meaning behind it's title. But why is the Friday after Thanksgiving black?

The term Black Friday came about in the 196os, and there are a handful of different theories as to how the day earned its namesake, two of which are considered the most credible.

The first explanation has to do with retail revenue. The days leading up to Christmas have always been busy shopping days, and thus days when many retailers make their biggest profits. At other times of the year, stores might face financial loss, but December is always sure to be a successful period. Traditionally, loss was written in red ink, while gain was recorded in black. And thus comes the term Black Friday, according to this history: this day marked the transition from red ink into black ink for most retailers as their profits soared.

Another theory has less to do with the retailers and more with the shoppers. Due to the chaos that ensued because of the crazy deals, the Philadelphia Police are said to have coined the term Black Friday. They called it this because, for police officers, the day was unpleasant and difficult. With overcrowded streets and shopping areas (and consumers who will do anything for that flat screen TV), the day created extra work and stress for cops on duty.

Whether it was hectic streets or a profit upswing that led to the name Black Friday, retail marketers quickly jumped on the term to advertise and further expand their holiday sales. Today, half a decade later, the term has become mainstream vernacular.

And now, thanks to a one-hit-wonder in 2011, I have chosen to refer to the day as Rebecca Black Friday, but maybe that's just me.

Whichever theory you choose to believe, you can still celebrate the occasion by waking up at the crack of dawn and having a shop-till-you-drop marathon. Or, like me, you can choose to forgo the crowds and enjoy the sales of Cyber Monday from the comfort of your own couch.

More Like This
Why It's Crucial to Get Good Sleep As A New Mom — Plus, Tips On How To Do It
Bright & Festive Nails To Rock On July 4th
Meet Your New Favorite Blazer(s)
Considering Getting A Tattoo While Pregnant? Here’s What To Know