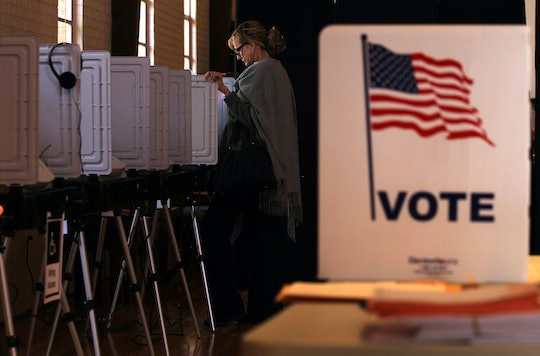 Why Is It Called Super Tuesday? The Voting Event Could Decide The Nominations

It seems like this election season has already been going on for years, but now, it's officially on. Iowa and New Hampshire have both had their say, so the next big deal, election-wise, will be Super Tuesday. This has some newer voters wondering, what the heck is Super Tuesday, and why is it called that? Simply put, it's when a whole bunch of states have their primaries on the same day. It's unofficial, so the date and states involved can vary, but this year, it's on March 1, and 12 states will be voting or caucusing in both the Republican and Democratic primaries: Alabama, Arkansas, Colorado, Georgia, Massachusetts, Minnesota, Oklahoma, Tennessee, Texas, Vermont and Virginia. Alaska, North Dakota, and Wyoming will also hold Republican caucuses, and American Samoa will hold its Democratic caucus.

According to the National Constitution Center, the name comes from the fact that so many states are banding together at once (and on the third day of the week, obviously). It's sort of like our chance to stick it to Iowa and New Hampshire for thinking they're so damned important; having so many different states vote at once paints a clearer picture of how the country is leaning as a whole, as opposed to how a handful of passionate folks in just two states are voting.

Super Tuesday isn't a law, but a tradition that began fairly recently; in 1988, Southern Democrats looking to amplify their region's influence scheduled nine primaries on the same day. It also had the added bonus of fighting the trend of "retail politics," in which candidates campaign on a local level to a group that's not really representative of the nation. See, for example, the recent trend of Evangelical conservatives winning the Republican vote in Iowa's caucus, but not elsewhere. There's an unusually high concentration of Evangelicals in Iowa, and they're out of touch with what the rest of Republicans want. Pandering to them may not be a good idea if a Republican hopes to win the nomination and eventually the presidency.

While the term "Super Tuesday" has been used since 1976, back then, it wasn't so super. The 1976 Super Tuesday hosted the primaries of just three states — California, New Jersey, and Ohio — and therefore, far fewer delegates. While just 540 Democratic delegates were at stake in '76, 40 years later, 1,004 are up for grabs. That's nearly half of what a Democratic candidate needs to secure the nomination. So, yeah, it's pretty super, alright.