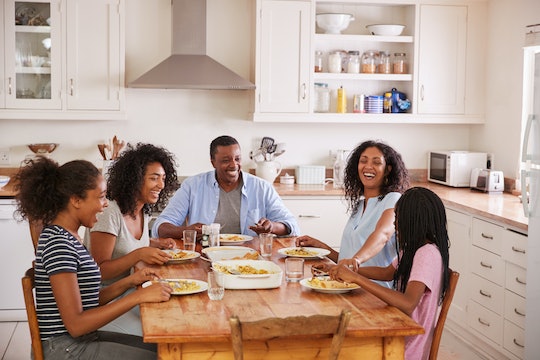 Turns Out, Family Dinners Are *So* Important For Your Kids' Eating Habits

When I was growing up, we had family dinners every school night. Unless I was sick or tied up with an extracurricular, family dinners were non-negotiable. I still remember how rebellious it felt to eat pizza in front of the TV with a babysitter or a sleepover guest. I didn't realize it at the time, of course, but all of these family dinners were in my best interest. Turn off the TV and pull up a chair: here's why family dinners are so important.

The benefits of eating together as a family can be split into two categories: heath benefits and social benefits. That's right — family dinners can help your little one in several different ways. In terms of physical health, according to the Harvard T.H. Chan's School of Public Health list of Obesity Prevention Recommendations for Families, eating meals at home as a family can prevent your child from gaining unhealthy weight.

Why is this? Well, there are a few different reasons that this might be the case. First, eating at the table eliminates distractions like television, toys, and other gadgets. This, in turn, prevents "mindless eating," or eating past the point of becoming full. Plus, family dinners are often homemade. As Michael Pollan wrote in his 2013 book Cooked, "Meals eaten outside of the home are almost uniformly less healthy than homemade foods, generally having higher fat, salt, and caloric content."

Additionally, when you join your child for meal time at the table, you can encourage them to try foods that they otherwise might not have, and you have the chance to lead by example. Modeling a healthy diet for your children at meal times is invaluable — so eat your veggies. According to a 2000 study led by Matthew Gillman, "Eating family dinner was associated with healthful dietary intake patterns, including more fruits and vegetables, less fried food and soda, less saturated and trans fat, lower glycemic load, more fiber, and micronutrients from food."

Of course, there is much more to family dinners than simply the food. Sitting down for a meal as a family is a bonding opportunity for young children and older children alike. Life can get busy, and it's sadly not uncommon to sacrifice meaningful conversation in the chaos. Meal times should be prioritized as moments to slow down, check in, and focus on one another.

And what are the results of these special family mealtimes? According to a report by CASAColumbia, children who ate an average of five meals at home per week had lower rates of substance dependency and better relationships with their parents. Other studies have linked frequent family dinners with higher grades in school, as well as lowered rates of depression, suicidal ideation, and eating disorders.

Finally, meal time is a unique opportunity for your child to sit with adults and simply observe and absorb. At the dinner table, your children pick up new words they hear you say. They watch you communicate with others, and they practice holding conversations. They learn good manners and how to share. They learn how to compromise, how to listen, and how to behave in a more "grown up" setting. If you plop them in front of the TV with their meal, they miss all of that.

It's certainly not always convenient to get everyone around the dinner table to share a meal. Some days, it might be the last thing you want to do. However, family meals are incredibly beneficial for your little one, and it's important to make them a priority. After all, the sooner they develop these good habits, the easier your job will be in the future.