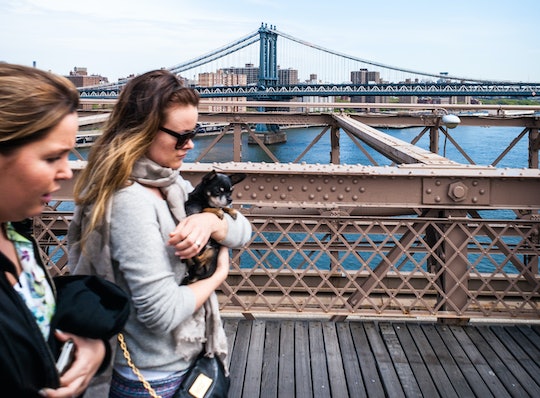 Why Is It So Warm In December? Scientists May Know The Answer

Today is going in the record books as the warmest Dec. 13th in New York City in over a century, and the highs are supposed to keep coming all week. Other cities that shattered records included Ottawa, Chicago, St. Louis, and Detroit, among others. The warm weather isn't really setting the stage for a winter wonderland, and people are beginning to wonder: why is it so warm in December? Temperatures in New York have been recorded since 1869, and the last time NYC broke its own warm winter record was in 1923. The 66 degrees F seen this weekend — the highest temperature in New York in over a century — has been celebrated by some but left others concerned.

The cause scientists are pointing to is El Niño, the climate phenomenon that warms the Pacific Ocean, usually near the equator. El Niños typically come around every two to seven years and heat up Pacific waters by up to 7 degrees F and changing global circulation patterns. The last El Niño was in 1997, and it was the worst one in history books — it created weather conditions that killed approximately 23,000 people, and was behind nearly $45B in damages. By causing warmer temperatures, El Niños lead to shifting patterns that create more storms, more forest fires, and, in general, more destruction.

The scary thing is that scientists are predicting this year's El Niño may actually be worse than 1997's. The National Oceanic and Atmospheric Administration said Thursday that this year's episode will likely rank in the top three warmest El Niños on record since 1950, so brace yourselves. I probably won't be fulfilling my lifelong dream of a white Christmas this year, unless we have some kind of drastic change in the next 12 days (I won't hold my breath).

With a climate deal having just been reached in Paris Saturday, it makes sense to ask: is global warming making El Niño worse? It sort of depends how you read the situation. While climate change is unlikely to make the climate phenomenon more frequent — though some argue otherwise — it is quite likely to make the episodes themselves worse. If our waters are already warmer due to climate change, El Niños will only make things worse when they come around, leading to more devastating effects when it comes to the hurricanes and floods that El Niños have historically brought with them.

Saturday, as part of the historic Paris agreement struck at the COP21 conference, a group of almost 200 countries pledged to keep climate change from climbing more that 2 degrees C and to limit greenhouse gas emission to a number that our environment can naturally reabsorb through soil, trees, and oceans — although that arm of the deal is not set to begin until sometime between 2050 and 2100. However, at 1 degree C of change already, the world is already halfway to that 2 degree limit, and many scientists (and attending countries) argued for a more stringent (and difficult!) limit of 1.5 degrees C.

I was enjoying the warmer winter here in Toronto — everyone's been telling me I picked the best year possible to move to the east coast of Canada — but walking around in a jumper in December just doesn't quite feel right. I hate to say it, but let's cross our fingers for a colder winter next year — and hope the El Niño fallout this year isn't quite so devastating.