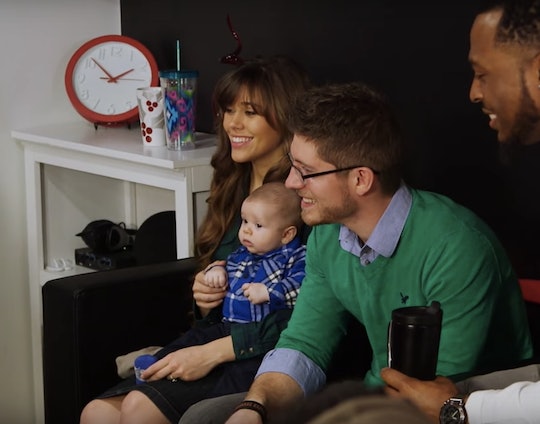 It's sort of annoying that families have to "explain" their kids' names to other people, since, really it's no one's business. But when you're Jessa Seewald (née Duggar), people are going to ask — just take a look at the speculation and rumors already swirling around her new baby, who as of yet remains nameless. So why is Jessa's older child Spurgeon named Spurgeon? It's not exactly a common name for a boy.

Spurgeon, who was born in November 2015, is named after a British preacher, Charles Spurgeon, who lived from 1834-1892. He's pretty famous in the Christian world and known as the "prince of preachers." A Baptist, Spurgeon started preaching at a young age and earned such a reputation for himself that a German philosopher started telling people, "sell all the books you have, and buy Spurgeon." So the now-elder Duggar-Seewald child may have some big shoes to fill — but really, that's a great role model to look up to. Whatever your religion, someone whose books and speaking skills are that captivating has to be a good influence.

But Spurgeon has another name, too. His middle name, Elliot, was reportedly chosen in honor of two late missionaries, Jim and Elisabeth Elliot, who worked in South America trying to convert Ecuadorians to Christianity. Again, some big shoes to fill, but the newly-minted older brother will likely have no trouble living up to his name.

Just in case you feel like Spurgeon is too much of a mouthful, the Duggar-Seewalds actually call him Quincy. How they ever keep track of all those names is anyone's guess. Quincy has less of a heavy backstory, the couple wrote on their blog during Jessa's pregnancy. She wrote:

When we first found out that we were expecting a baby, Ben and I were talking about a letter theme for our kids and Ben suggested, ‘Why don’t we go with the letter Q’?’ lol!, Of course that was a joke, but from that point, Ben started calling our little one ‘Quincy,’ and the nickname just sorta stuck.

At the time, she didn't know what she was going to name the infant, but did say that she wanted to stick with a Christian theme for their first child. She obviously kept her promise.

On Monday, the family announced the birth of their second son, though, according to People, they haven't settled on a name for him, just yet. Jessa said she's excited to have two sons so close in age and hopes they become close friends. "Ben’s probably gonna have ‘em out in the backyard playing football not before too long in the next couple years," she gushed.

Spurgeon and his little bro are definitely going to be friends — but they might not be the only children. Jessa joked that she told Ben during labor that they weren't having anymore kids. "We're adopting the rest," she joked. The Duggar crew certainly has room to grow — and if they do, there's no doubt they'll all be graced with some pretty spectacular names.