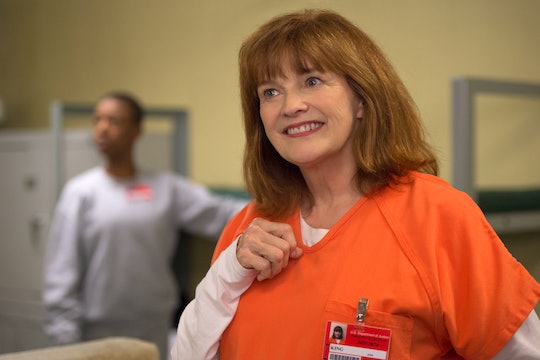 Why Is Judy King In Prison On 'Orange Is The New Black'? She's Going To Shake Things Up

The format of Orange Is The New Black allows for a lot of turnover within the cast: prisoners come and go, guards are hired and fired. The privatization of Litchfield prison at the end of Season 3 means there will be an influx of new people in Season 4, giving the show new characters and new storylines to explore. One such character is the much-hyped Judy King, who made small appearances throughout Season 3 as the inmates followed her trial on television and tried to guess which prison she would end up at. She ultimately found herself at Litchfield, but why exactly? Why is Judy King in prison on Orange Is The New Black?

Judy King is a celebrity in the world of the show thanks to her cooking show, Judy King At Home, and she was arrested for tax evasion. At first glance, she seems to take inspiration from a few real life people. The most obvious allusion is Martha Stewart, who served time for her own white collar crime; then again, Judy's Southern roots call to mind Paula Deen, who hasn't served jail time but has gotten in her fair share of trouble. (Romper has reached out to both Stewart and Deen's representatives for comment.) Both women are high profile TV personalities and business moguls with huge lifestyle brands to their name. Judy King seems to be of the same type.

Tax evasion is pretty much what it says on the tin: when someone tries to get out of paying the taxes they're legally obligated to pay. According the IRS website, those convicted of the felony will usually have to pay a large fine and often serve jail time. The maximum sentence is five years and the fine for a single person is $250k – probably a drop in the bucket for someone with Judy King money. It's a less serious charge than something like insider trading, which could earn someone twenty years behind bars and cost them some major dollars.

Judy might end up with a shorter sentence thanks to her fame and fortune (it has been known to happen, after all) but it looks like fans might be able to expect to have Judy around for a few years at least. And while she's there she's going to have a big impact.

Judy promises to shake up the dynamics of the prison, and not just because she's a famous figure. Actress Blair Brown describes her as "slightly appalling and very good and very cheerful and probably fairly amoral," as well as a new friend to Poussey, who is apparently a big fan. Judy's upbeat personality and affluent lifestyle will put her at odds with the rest of the prison population, which will provide some interesting conflict.