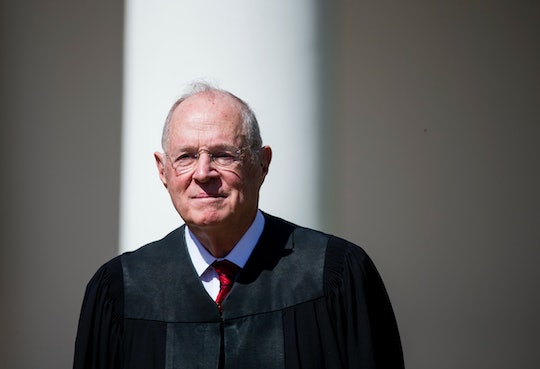 Why Is Justice Kennedy Retiring? Here's What We Know

On Wednesday, June 27, Justice Anthony Kennedy shocked the nation after he submitted his letter of retirement to President Donald Trump. The retirement will be effective on July 31 — meaning he only has about a month of service left. For those who aren't familiar with Justice Kennedy, he's considered by many to be the "swing justice," because he often casts the deciding vote on the nation's most high-profile cases. Although Supreme Court justices are free to serve for life, they are free to bow out at any point if they choose to retire. But why is Justice Kennedy retiring? He's served on the Supreme Court since 1988.

Amid the breaking news, Kennedy's retirement letter to President Donald Trump was published Wednesday by CNN. It was short, sweet, and to the point — however, it didn't offer any explanation for his decision. Certainly, the 81-year-old (82 in July) justice's age could be a factor. However, he did not indicate this in his letter. "My dear Mr. President, This letter is a respectful and formal notification of my decision, effective July 31 of this year, to end my regular active status as an Associate Justice of the Supreme Court, while continuing to serve in a senior status, as provided in 28 U.S.C 371 (b)," Justice Kennedy wrote. He continued:

For a member of the legal profession it is the highest of honors to serve on this Court. Please permit me by this letter to express my profound gratitude for having had the privilege to seek in each case how best to know, interpret, and defend the Constitution and the laws that must always conform to its mandates and promises. Respectfully and sincerely, Anthony Kennedy.

In response to Kennedy's letter, President Trump revealed the search for his replacement will begin immediately, CNN reported. "He's been a great justice of the Supreme Court," Trump said. "He is a man who's displayed great vision, he's displayed tremendous vision." Before the announcement was made, Trump and Kennedy met briefly on Wednesday about moving forward in the process of replacing him, the publication reported. "(We) had a very deep discussion. I got his ideas on things," Trump said at the Oval Office, according to CNN. "I asked him if he had certain people he had great respect for that could potentially take his seat. According to USA Today, Trump added,

It will be somebody from that list. We will pick someone who is just as outstanding.

NPR reported that while on the Senate floor, Senate Majority Leader Mitch McConnell said, "The Senate stands ready to fulfill its constitutional role by providing advice and consent on President Trump's nominee to fill this vacancy. We will vote to confirm Justice Kennedy's successor this fall." If you remember, McConnell was the one who blocked President Barack Obama's nomination of Merrick Garland back in 2016 until after the presidential election. Ultimately, it was Justice Neil Gorsuch who filled the vacant spot.

Plenty of Democrats have used McConnell's tactics against him, arguing the Supreme Court vacancy shouldn't be filled until after a new Congress is elected. "Sen. McConnell set the new standard by giving the American people their say in the upcoming election before Court vacancies are filled," Illinois Democratic Sen. Dick Durbin said in a statement, according to TIME. "With so much at stake for the people of our country, the U.S. Senate must be consistent and consider the President's nominee once the new Congress is seated in January."

During the iconic 2015 Supreme Court case (Obergefell v. Hodges) that ultimately legalized same-sex marriage in the U.S. — which celebrated its third anniversary on June 26, by the way — it was Justice Kennedy who wrote the majority opinion. “No union is more profound than marriage, for it embodies the highest ideals of love, fidelity, devotion, sacrifice, and family,” he wrote, according to The Washington Post.

In forming a marital union, two people become something greater than once they were. As some of the petitioners in these cases demonstrate, marriage embodies a love that may endure even past death.

Proponents of women's rights and gay rights are undoubtedly on-edge about Justice Kennedy's impending retirement. Although he hasn't yet disclosed a reason for this decision, a number of factors could play into his retiring. Maybe he's just tired and ready for a more low-key life. Perhaps there's an underlying health problem going on. Whatever his reasoning may be, I wish Justice Kennedy the best of luck as he wraps up this important role and begins the next chapter of his life. I can only hope someone of the same caliber of character is nominated as his replacement.