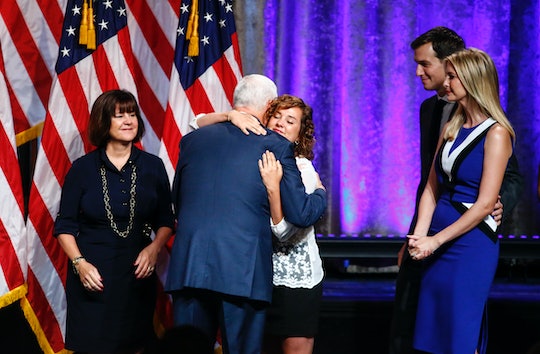 Why Is Karen Pence’s Towel Charm Business On Hold? It's Been The Subject Of Critique

In the political excitement that's surrounded the appointment of Indiana Gov. Mike Pence as Donald Trump's running mate, there's been one casualty. "That's My Towel" is the business venture of Karen Pence, Mike Pence's wife, and when Pence's candidacy as vice president was announced, "That's My Towel" got a lot of attention, and most of it was not good. Shortly thereafter, a messaged appeared that the project was being suspended until further notice, but why is Karen Pence's towel charm business on hold?

First, here's a bit more information about the "That’s My Towel" phenomenon. If you've ever walked up from taking a dip in the ocean and not been able to find your towel, this may be the invention for you. Pence designed towel charms (they sold for $6.25 each, according to the Huffington Post) to affix to your towel so that you know, for sure, that it's yours. It follows the logic and aesthetics of the popular housewarming gift item, wine glass charms, which purport to eliminate the issue of drinking out of the wrong glass.

It may not come as a surprise that Pence's business was mercilessly, doggedly trolled over the weekend by a number of media outlets who called the idea of towel charms, essentially, absurd. After the onslaught of bad press, the "That's My Towel" Twitter account was made inactive and followers received the message:

Thank you for your interest in Towel Charms. The business is currently on hold

It's unclear why the business was put on hold — if it was the criticism or Mike's status as potential vice president — but Karen Pence doesn't deserve to be derided.

Regardless of her husband's politics, and even regardless of the idea of towel charms, the criticism Karen Pence received was inappropriate. Women tearing each other down or allowing others to tear them down is bad for feminism — no matter who it is. Women get enough flak for their ideas as it is, and this kind of behavior is what continues to discourage women to go out on a limb, start a business, or just have an idea of their own.

What does deserve derision isn't Karen Pence's idea, but her husband's policies. It's hypocritical to criticize Pence's anti-abortion legislation, which holds women back, and then turn around and give Karen Pence flak for following through with her own business venture — it's not a very "Women for women" attitude. There's a lot out there to get riled up about; this should not be it.