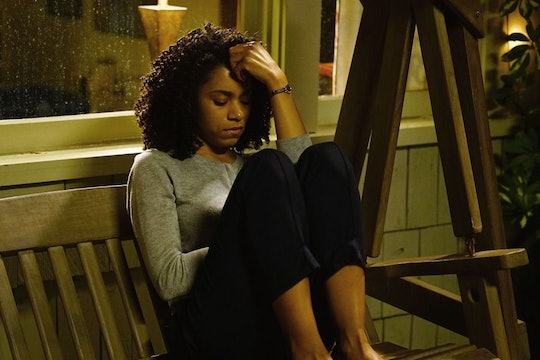 Maggie Is Dealing With A Lot Of Grief On 'Grey's Anatomy'

Last week's episode of Grey's Anatomy was utterly heartbreaking. After fighting so hard for her mother to live, Maggie's mom ended up dying of breast cancer by the end of the episode. By now Grey's fans should be used to characters dying on the show, but this one still hurt a lot, especially because up until now Maggie had never really experienced any kind of loss. Though her mother's death just happened, Maggie will be getting back to work in the next episode. So why is Maggie returning to work on Grey's Anatomy?

Maggie's been through a lot. Her mother didn't tell her she had cancer until right before her surgery and up to that point Maggie believed her mother was getting a boob job. Therefore, Maggie treated her mother poorly, judging her for wanting to make her breasts bigger. Once Maggie found out the truth, she felt terrible and then became very controlling over her mother's care.

Maggie convinced her mother to do a risky trial treatment that ended up putting her through a lot of pain. She did it, though, so that Maggie could feel like she was doing everything possible to save her. Finally, she decided to stop the treatment and spent some quality time with Maggie before taking her very last breath. No one would blame Maggie for wanting to take a break after all of that, but it appears she has other ideas.

As Meredith puts it in the promo for Thursday's episode "What's Inside," Maggie is "jumping back in." According to the episode description, Maggie will take on a big case, despite the fact that many of the doctors believe she's not the right person for the job. For Maggie, she probably wants a distraction from the pain she feels over her mother's death and is hoping if she gets back to work, she won't have to think about it. Kelly McCreary, who plays Maggie, said as much to Entertainment Tonight in a recent interview, stating that Maggie "goes right back to work because that’s healing for her."

Still, based on the promo, it looks like this plan will backfire for Maggie. Since Arizona's also in the operating room, one has to assume they're either working on a child or a pregnant woman. In either case, if the patient dies on the table because of Maggie, that could be a loss she can't recover from. Hopefully that doesn't happen, but with Grey's you never really know.

In either case, it seems Maggie is definitely not ready to go back to work and no matter happens with this surgery, she should take the time after to really grieve before getting back into those scrubs.