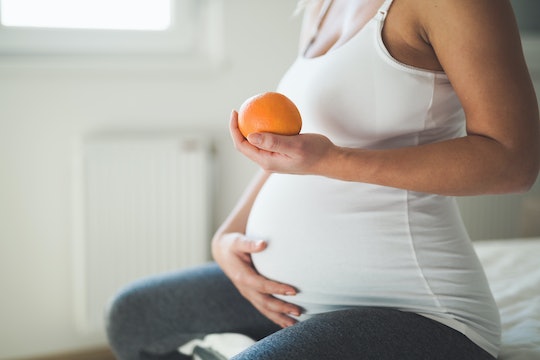 Feeling Less Hungry In The Third Trimester? Here's Why

It turns out, there are a few possible reasons lurking behind the lack of appetite in the third trimester, according to The Journal of Clinical Nursing. The first, and most common is that there just simply isn't room to eat. The baby, and their placenta, is taking up too much real estate inside of the mother's torso, and that pressure is leaning on the stomach and intestine, causing a "full" feeling, and decreasing the appetite of the mother. The other primary reason for a lack of appetite isn't as easy to explain away. According to Metabolism, women who suffer from pregnancy-related depression often note a marked decrease in their appetite as their pregnancy and depression continues into the third trimester.

I know that when I was pregnant I didn't want anything to do with food in the third trimester. For me, it exacerbated my reflux, I was too full too fast, it made me drowsy in the middle of the day, and I'll be blunt — I got gassy really easily in my third trimester. I'm not kidding — I felt like a balloon was being stretched out inside of my abdomen only to be released at the most inconvenient time. Like at yoga or in class. Do you know how hard it is to get out of one of those desks and into the bathroom in time for your butt to explode discreetly? It's not easy, let me tell you. I had about a 50/50 chance of making it there. Like pregnancy isn't cause for enough awkward moments, I had to be strapped with whoopie cushion tush as well.

I spoke with British midwife Tess Brown and asked her why one may inquire, "Why is my appetite gone in the third trimester?" She tells Romper that it's actually really common. "Most mothers will notice a decrease in their level of hunger generally later on in their pregnancy. Your baby is taking up quite a lot of space, and it puts so much pressure on your stomach, intestine, lungs, and esophagus." She says this leads to increased reflux, a feeling of fullness, and a slowing of the movement of food and gas through the intestine. "Your digestion really hits a crawling pace the further on you get. This is not only going to make you less hungry, but it can be really very painful as well."

When I asked about depression, Brown tells Romper, "Unfortunately, depression and insomnia go hand-in-hand with appetite. While it may swing the pendulum in either direction for your appetite, it's probably going to be affected no matter what. It's a circle — you get depressed and you can't sleep and then you're too tired to eat or manage. Or you sleep too much and you might find yourself in a binge cycle." She says that depression during pregnancy is more common than you'd think, and you should talk to your provider about it.

Brown tells Romper that in both situations, the remedy is to try to eat several small meals throughout the day that don't upset your stomach and help digestion. Think whole grains, fruits and vegetables, and lots of water. She also says that taking long walks or working out can help stimulate the appetite and keep your digestion moving onward. Otherwise? Order delivery at the hospital once you've made room.