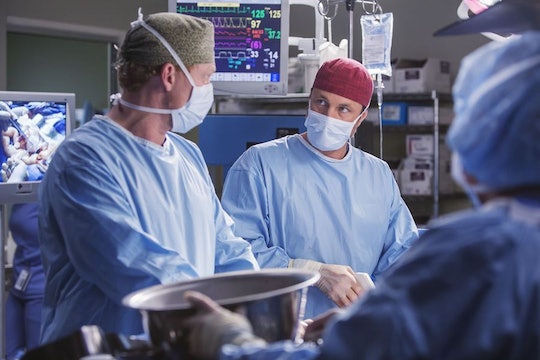 Why Is Owen Mad At Riggs On 'Grey's Anatomy'? His Grudge Isn't Fair

When Riggs first appeared on Grey's Anatomy, his history with Owen was a complete mystery. All we knew was Owen hated Riggs on Grey's Anatomy, for some reason, and they both agreed they'd never get along. But now that Riggs has been on Grey's for almost a full season one thing has become clear: Owen needs to let it go.

We found out a few episodes back that the truth is Owen had a little sister named Megan who he was super close to. Owen and Megan went to medical school with Riggs and while Owen and Riggs became bros, Megan fell in love with Riggs. Of course, as with most couples on Grey's, Megan and Riggs didn't last.

We know that Megan and Riggs had been working out in the field and a helicopter came to take a patient to the hospital but only one doctor could go with them. Because it was Megan's patient, Riggs eventually relented and Megan got on the helicopter. But, the helicopter never made it to the hospital. It disappeared, along with Megan, and Owen has never forgiven Riggs.

Wait a minute. A missing a helicopter? That's why Owen blames Riggs? Doesn't that sound very similar to the plane crash back in Season 8? You know, the one where Mark and Lexie died and Arizona lost her leg? Didn't Owen get blamed for that crash because as Chief he neglected to look into the plane and missed the fact that the plane had a history of mechanical problems, hence why the plane crashed?

And then didn't everyone eventually forgive Owen, acknowledging that it wasn't really his fault? Yeah, I'm pretty sure that happened. So if everyone could forgive Owen for that, why can't Owen forgive Riggs? For one thing, what Owen did was much worse because it was his job to know about the plane whereas for Riggs he had no reason to assume anything would happen to that helicopter or Megan. And Riggs has said multiple times he would've gotten on that plane if he could.

Moreover, as Riggs pointed out in last week's episode, Owen completely shut out any memory of his sister. This season was the first we even heard of Megan, and according to Riggs, it was Owen who decided to stop looking for Megan in the woods. Therefore, it seems the person Owen is really angry with is himself, but he's taking it out on Riggs, as Riggs points out.

Based on previous episodes it's clear Owen's issues with Riggs are effecting his relationship with Amelia. Hopefully Owen can forgive Riggs and move on before he loses Amelia for good this time.