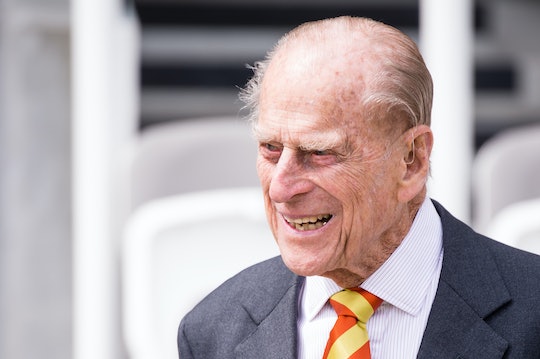 Prince Philip Is Stepping Down From Royal Duties

On Wednesday morning, it was announced that Queen Elizabeth II's husband, Prince Philip, would be stepping down from public life. The news was released quickly after the media started reporting that there were meetings being held at Buckingham Palace. The announcement will certainly surprise some, and many will be asking why Prince Philip is stepping down from royal duties in the fall.

According to the BBC and a palace spokesman, the decision to step down from public engagements was made by Prince Philip himself, although he has the full support of the Queen in his decision. The choice to abstain from public engagements and other royal duties will not go into effect immediately, the BBC reports, instead he will no longer be accepting new invitations starting in August (he will fulfill previously scheduled engagements from now until then).

An official statement was released by Buckingham Palace after the decision was made and read:

The question of "why" remains — is there a reason that Prince Philip is choosing to step down from his program of scheduled engagements? Prince Philip will turn 96 in June, and while no direct statement has been said that his age is a factor of this decision, it is fair to think that he, like anyone else in life, is looking to lighten the amount of engagements he tends to as he gets older.

Following the announcement, The Royal Family Twitter account tweeted that in his years as Duke of Edinburgh, another title for his role, Prince Philip has carried out 22,191 solo engagements.

Although nothing has been said about his health, those curious about Prince Philips stepping down will sure to be wondering if health reasons are at the root of the announcement. In June 2013, according to The Guardian, Prince Philip spent almost two weeks in the hospital due to an "exploratory abdominal operation." The year before, he was in the hospital for a bladder infection.

While you can't blame a 96 year old for wanting to take some time off, let's hope that Prince Philip's is feeling well and his decision is simply because he is looking for a little rest time.

More Like This
Queen Elizabeth Doesn’t Really Get Eat-In Kitchens
Netflix Reveals The Official Teaser Trailer for Wednesday
What Parents Need To Know About Marvel's New She-Hulk Series Coming To Disney+
Kristin Bell Shared Some Sweet, Rare Photos Of Her Daughters From A Family Vacation