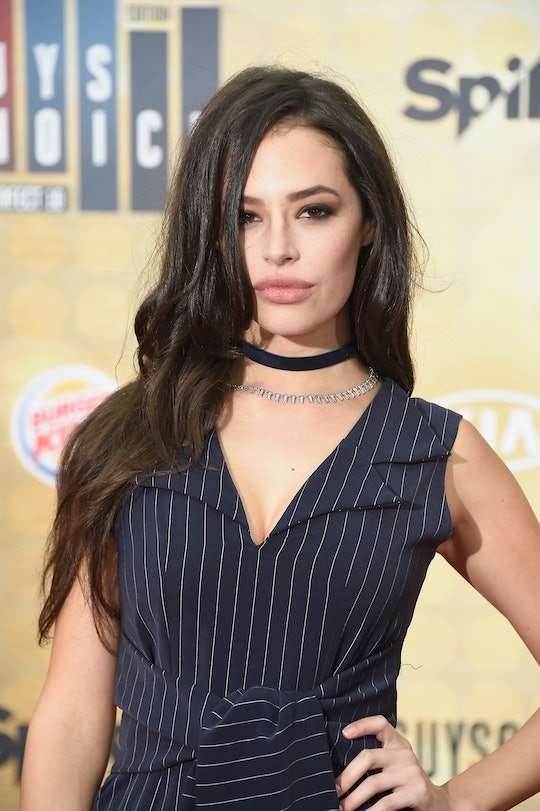 Sydney From 'PLL' Must Be In Rosewood For A Reason

The final 10 episodes of Pretty Little Liars is bringing back a lot of familiar faces. Aria's childhood friend Holden popped back up in the first episode and now Jenna's lookalike Sydney is back in town. So why is Sydney in Rosewood on Pretty Little Liars? It looks like Aria and Emily may have tracked her down.

In a sneak peek for the new episode, Aria and Emily do some recon on Sydney, seeing what she's been up to since fans last saw her impersonating Jenna in the first half of Season 7. Turns out Sydney has been doing well for herself and is working as a private bank teller for rich people. Besides that, she also attended the same event as Hanna's client (you know, the one who wanted to wear that dress Hanna was stressing about). Aria and Emily find a photo of Sydney at the event where she appears to be taking a picture of the dress, leading the Liars to believe that's how Jenna got a copy of the outfit. However, timeline wise, that makes no sense.

Hanna was already worried about letting the girl use her dress because her former boss had given her multiple critiques that made it look better. Then, later in the episode, she and Mona saw Jenna wearing a white version of the dress. How could Sydney have taken a picture of the Senator wearing the dress, sent it to Jenna to have it recreated, all before Hanna even agreed to let the Senator's daughter borrow the dress? It doesn't add up.

Despite that, Emily and Aria are sure Sydney is up to something and even believe Jenna's whole story to the police about Noel threatening her was actually a ploy to protect Sydney, who they believe was the other shooter in the house. This is big jump in thinking, and also serves as a reminder of why Spencer should be included in all theorizing and scheming.

Regardless, based on the preview, it looks like Emily and Aria do confront Sydney, with Aria pushing her up against a brick wall. Hopefully, for Aria and Emily's sake, Sydney really is guilty of something, otherwise this will get really awkward for them. Though they definitely have their reasons for being suspicious, Sydney just doesn't seem like the type to shoot someone. At best, she's just been a nuisance to the Liars, not murderous. It'll be surprising if she really did shoot Spencer. Thankfully, fans won't have to wait much longer to find out.

More Like This
Netflix Reveals The Official Teaser Trailer for Wednesday
What Parents Need To Know About Marvel's New She-Hulk Series Coming To Disney+
Kristin Bell Shared Some Sweet, Rare Photos Of Her Daughters From A Family Vacation
Adrienne Bailon & Israel Houghton Welcome A Baby Boy Via Surrogate