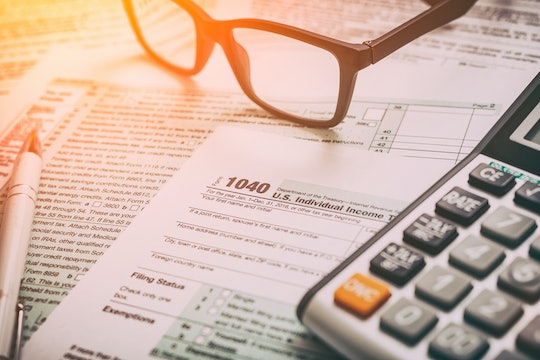 Traditionally, Tax Day falls on April 15. You'll note this by the look of dazed confusion on the faces of those who are staggering bleary-eyed out of their accountant or tax preparer's office. The country goes a bit haywire over it. Bars have specials, furniture stores have sales to entice people to spend their refunds, and your Facebook timeline is probably flush with people whining about their tax bill. But this year, it's two days later. So why is tax day April 17 this year? It turns out, there is a reason to thank Washington.

Tax day was not set arbitrarily by the government to screw with your Spring break agendas. No, according to the Library of Congress, it was originally meant to be held on 1 March, but the work of the Internal Revenue Service and tax preparers became too much. In an effort to ameliorate the rush of Americans filing their taxes so close to the beginning of the fiscal period, the United States Government chose to push back the deadline to April 15 in 1955, and they decreed that it must not happen on a weekend or fall on any holiday — either national or local. This year, tax day is on April 17, because Washington D.C. celebrates Emancipation Day on April 16, the first day after the weekend wherein 15 April falls.

So there seems to be only one solution I can come up with to make tax day a little more bearable for all of us: more holidays. What if Boise, Idaho adopted Potato Day on April 14? In New York City, April 15 could be Subway Performers Appreciation Day. Hey, Cleveland, The Rock Hall usually inducts in the spring, right? How about Ohio makes it a state holiday?

If we have a holiday for every day in April, we can push that tax crap to May.

Seriously, though. Just when you thought Washington D.C. was the place hope goes to die, the fine citizens of the district choose to celebrate the district's emancipation of slavery. As per their website, "The D.C. Compensated Emancipation Act of 1862 ended slavery in Washington, D.C., freed 3,100 individuals, reimbursed those who had legally owned them, and offered the newly freed women and men money to emigrate." What a beautiful, meaningful holiday.

It's even more poignant given the fact that the citizens of the District of Columbia have no direct governmental representation and very few voting rights allowed to them beyond the mayorship. It's fitting that the district of 700,000 people who live under the umbrella of taxation without representation should be pushing back tax day, is it not?

Honestly, I used to love tax time. I'd get a nice, cushy refund. I'd go blow half of it immediately and use the other half to pay down debt. It was great. However, now, like many other aging millennials, I find myself paying taxes each year, and dreading the deadline. On one hand, I am grateful that I am blessed well enough that my money is being used to fund programs like SNAP and Veterans Affairs. On the other hand, it's still a bill that I have to pay, and it definitely hurts a little each time.

Also, it should be noted that the cost of tax preparation is tax deductible, at least for now, according to the IRS. The IRS likes it when your taxes are filed by a knowledgeable preparer, and according to financial website The Motley Fool, you're less likely to be audited if you use a seasoned tax preparer.

So remember, tax day is April 17, and you must file by midnight. Adulting isn't fun, but it does keep America's lights on, so to speak, so make sure to get it done.