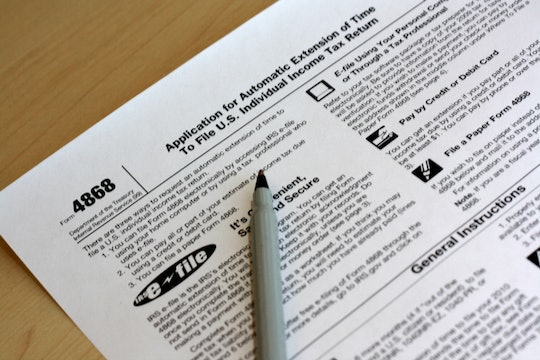 Why Is Tax Day April 18 This Year? You Can Thank Honest Abe

When it comes to topics that are completely baffling, taxes are pretty high on the list. Knowing what counts as a deductible, what form to use, and how much you can expect to pay is enough to drive almost anyone up the wall. But there is one hard fact about taxes that everyone knows: they are due on April 15. Well, except for this year. Why is tax day April 18 this year, anyway? And where was this automatic extension a couple of years ago when I really could have used it?

The 2016 tax season is breaking a long tradition, because tax day has fallen on April 15 for more than 60 years. Before that, it fell in the middle of March. In 1954, according to Time Magazine, lawmakers switched income-tax day from March 15 to April 15, to give taxpayer an extra month to recover from Christmas costs and "sparing him the yearly ordeal of hearing and reading clichés about the ides of March." And if there’s one arena where the IRS excels, it’s orderliness. No one would accuse the agency of capriciousness. But the reason tax day was pushed back this year commemorates a very important date in American history.

The altered tax date for 2016 is due to a holiday called Emancipation Day. "The DC Compensated Emancipation Act of 1862 ended slavery in Washington, DC, freed 3,100 individuals, reimbursed those who had legally owned them and offered the newly freed women and men money to emigrate," according to DC.gov. "It is this legislation, and the courage and struggle of those who fought to make it a reality, that we commemorate every April 16, DC Emancipation Day." So why does this affect tax day? As IRS.com explained, Emancipation Day is an official public holiday in Washington D.C. that usually falsl on, well, April 16. But if April 16 is a Saturday – which it is in 2016 – then Emancipation Day moves to April 15. Because Emancipation Day is a legal holiday, the tax deadline gets pushed back to Monday, April 18. As though Americans needed any more reasons to love Abraham Lincoln.

And how do residents in D.C. mark this occasion? According to The Washington Post, Emancipation Day is celebrated with a citywide parade .Concerts and fireworks are also common. And this year, tax procrastinators will have even more reasons to celebrate.

And if you're a residents of Maine and Massachusetts, you have even more reason to celebrate. IRS.com noted that residents of these states have until Tuesday, April 19 to file their taxes because "Patriots’ Day is a statewide legal holiday that’s observed on the third Monday of April" in these states. Because this year it will fall on the revised tax deadline, residents of these two states get an extra day for their taxes.

Is it too late to move?