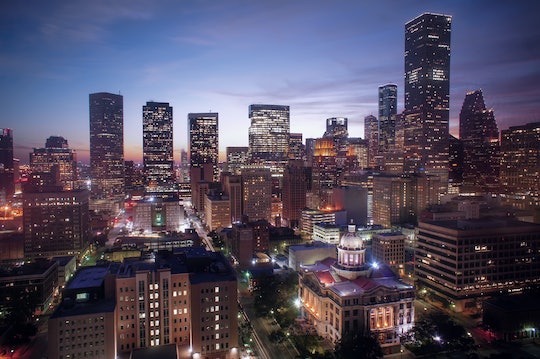 Why Is Texas Getting So Much Rain? Flash Floods In Houston Have Almost Shut Down The City

Transit, schools, and government offices in Houston have been closed, and residents have been urged to stay at home after more than a foot of rain fell on the city Monday, causing flash floods and creating what the city has called "a life-threatening emergency," according to CNN. Why is Texas getting so much rain? The conditions seen in Houston look strikingly similar to the floods that hit the city in 2001 as a result of Tropical Storm Allison, according to The Chron. But, according to CNN Meteorologist Sean Morris, Monday's rainfall in Houston is actually the result of a low-pressure area hanging out over the western U.S., letting "moisture from the Gulf of Mexico [flow] into Texas."

What does this mean for Houston residents? Well, they can expect the rain to continue at least into Tuesday, before it moves northeast and becomes less intense. Until then, the city will likely remain almost completely washed out, with bayous overflowing. So far the floods have caused the closure of nine hospitals, and the evacuation of three apartment buildings and more than 1,000 homes, according to CNN. And then there are the blackouts: by Monday morning, more than 100,000 homes and businesses in Houston were left without power.

It's not just the amount of rain that's problematic, though, it's also the fact that it has fallen in such a short period of time. According to Mashable, the city got dumped with more than 16 inches of rain in only 12 hours, which makes flooding practically inevitable. The storm has caused hundreds of high-water rescues, according to Reuters, and has led Harris County official Ed Emmett to sign a disaster declaration for the region. Emmett has been disseminating updated information via Twitter Monday, urging people to stay off the roads, and to steer clear of the floods. According to Emmett, almost 900 waters rescues have taken place in Houston since the rain started.

Houston Mayor Sylvester Turner has echoed Emmett's words about staying off the roads to keep safe, according to The Chron:

It's an unprecedented amount of rain that we're getting. Unless it's an extreme, extreme emergency, I'm encouraging all Houstonians to stay at home. Stay off the streets. You'll help yourself and, quite frankly, you will help all the responders out there who are trying to deal with all of these emergencies.

In response to the heavy rain, the National Weather Service has issued a Flash Flood Watch until Tuesday morning for a number of counties in the Houston-Galveston region, including Harris, Brazoria, Fort Bend, Montgomery, and Waller, among others. A coastal flood warning is also in effect until 4 p.m. on Monday.

Stay safe out there, Houstonians.