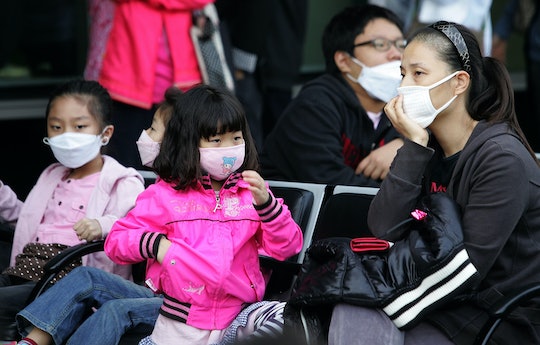 I dutifully managed to get everyone in my family the flu vaccine this year, which is no small feat considering there are five of us old enough to receive it. The three kids protested of course, but begrudgingly resigned themselves to the shot when I explained how dangerous the flu would be to their newborn brother or great-grandparents. Knowing we were all vaccinated gave me a sense of relief — until it no longer seemed to matter. It seems like every other person I know is getting hit, vaccinated or not. Why is the flu spreading so fast? The medical community has some answers.

Unlike some other vaccines, the flu shot changes in composition from year to year and its effectiveness depends on how well it matches the year's particular virus, which unfortunately is impossible to predict fully before flu season begins. According to one pediatrician interviewed by CNN, Dr. Tanya Altmann, the flu vaccine wasn't as accurate of a match this year as it has been in the past and the "flu just spread like wildfire." USA Today reported that the viral strain H3N2 is the one running rampant this year, which is notorious for causing more severe symptoms and being difficult to control.

Most susceptible to severity in this illness of course are young children and elderly adults. Adult flu deaths are not as closely monitored as children's, so it is difficult to get an accurate estimate, but at the time of writing, a horrific 63 children in the United States have already died from the flu this season. Clearly this virus is not something to be taken lightly. When children begin manifesting any flu-like symptom, parents should keep a vigilant watch and, when in doubt, make an appointment with their pediatrician.

Even though the flu vaccine was a poor match this season, physicians continue to urge citizens to get vaccinated since the symptoms are less severe in those who have received the flu shot than in those who have not. And although it feels like the outbreak has lasted forever, we're not necessarily nearing the finish line: According to the CDC, flu season can last as late as May.

Is there any hope for staying healthy this flu season? California-based internal medicine physician Dr. Kristine Arthur tells Romper there are no guarantees, but it's important to decrease risk to the extent that it is within our power.

"The best thing is avoidance, as much as possible. If you have the option of working from home, take it. If you can work in an area that has less contact with people, do it. When shopping, avoid peak busy times when you're exposed to a higher number of possibly sick shoppers," she advises.

At home there is obviously no way for family members to completely avoid one another, but precautions can and should be taken to minimize germ exposure. In addition to thorough and frequent hand washing, Arthur recommends family members avoid sharing utensils, dishes, or hand towels, and suggests wiping down any shared surfaces with antibacterial wipes multiple times a day.

"Be aware," she adds, "that purses, backpacks or other items from work or school may be carrying germs. Set them down beside the door rather than on your kitchen counter, dining table, or food prep area. Also consider having kids who are in day care or elementary school change clothes when they get home."

You can't quarantine yourself or your family from the world completely, but do take precautions against this relentless flu. Because the health of those you love is more than worth a few weeks of small inconveniences.

More Like This
14 Recipes For Sick Kids When Everyone's Tired Of Canned Soup & Crackers
Why Is My Discharge Brown? Experts Explain
Why Is My Vagina Itchy? Experts Explain
Doctors Swallowed LEGOS To Prove Everything Is Awesome For Kids Who Do The Same
What Parents Are Talking About — Delivered Straight To Your Inbox