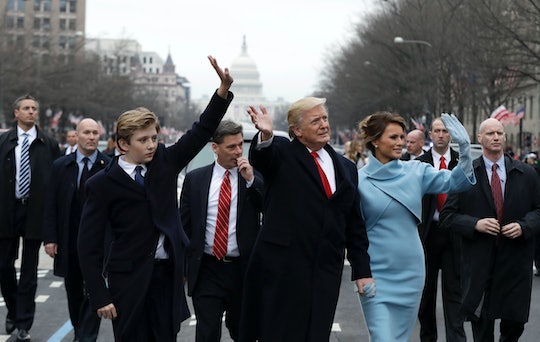 The Inaugural Parade Had A Late Start

On Friday, Jan. 20 people from all across the nation gathered to the nation's capital in Washington D.C. to watch President Donald Trump take the presidential oath of office. What followed from Trump's speech, given at the capitol was a full schedule of festivities — including an inaugural parade, followed by a night of dinners and dancing. But why is the inaugural parade so late? A busy day, like Inauguration Day, is never guaranteed to run smoothly.

The parade ran more than one hour late, according to CBS News, and was still happening well after the sun went down, veering close to the scheduled time of the inaugural balls. The parade was expected to start at around 3 p.m. according to TIME — right after the new president and vice president (and their families) had lunch with Congress and other dignitaries in the Capitol. But instead, according to ABC affiliate WJLA, the parade started around 4:30 p.m. Parade announcers were heard apologizing over the loudspeakers to attendees for the delays during the parade. But why was there such a big delay? The parade's late start and late ending could have been attributed to multiple things. With so many factors involved in the day, a smooth run was never guaranteed.

The weather, the protesting, and Trump's plans before the parade all seemed like fair contributions to the parade's late start. According to The New York Times, while Trump had lunch at the Capitol, police had "skirmished" with protestors — that are currently protesting in downtown Washington D.C. — by "hurling flash bang grenades to drive them from the inauguration parade route." The threat of potential violence or harm to anyone — especially the new President of the United States and his family — is enough to cause delays, especially when ensuring their safety. The president stayed in his car a little bit longer than expected during the parade, according to The Washington Post, due to protestors. The weather could also have been a factor in the parade's delay. According to The Washington Post, rain remained in D.C. well into the afternoon.

Despite the parade's delay, Trump's inaugural parade is actually much smaller than parades in years past. According to Us Weekly, this years parade had 82 groups participating — compared to 2009, when Obama's last inaugural parade had more than 100 groups participating. Whatever the case may have been, it didn't seem as if many were happy about the delays. Twitter users captured the empty bleachers along the parade's route:

Blame the low attendance on protestors or the weather — but the fact still stands — the inaugural parade started late and ended far later than expected.