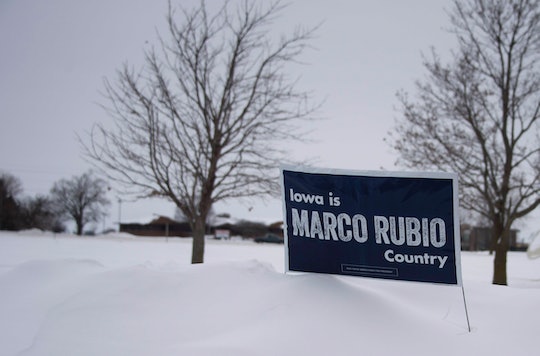 Why Is The Iowa Caucus Important? It's A Huge Predictor For The 2016 Election

There's been a lot of hubbub and hullabaloo about the upcoming Iowa caucuses, as there is every four years before an election. When it comes up in conversation, it's easy to nod and smile, say something vague about democracy, maybe even throw out "electoral college" and hope nobody picks it up. Nod and smile no more! Here's some real info on this impending political event that'll put a bite in your conversation, a spring in your step, a ballot in your hand, all that. To start, knowing why is the Iowa caucus important is crucial. And the simple answer is that many people believe it's a good predictor of who will be the presidential nominees.

The Iowa caucuses, on Feb. 1, are important because it is the first time real people, in any state, get to say who they would like to be president. At the specified time, usually in the evening, Iowans go to some location (there is one for every 1,681 precincts in the state) for the event. The caucuses are organized separately by each major party, and Democrats and the GOP have very different ways of running the show. Republicans have some speeches, then they take a secret ballot on the candidates. Those votes are tallied across the state. Democrats make things much more complicated, but it sounds kind of fun. Everything is public. Caucus attendees debate with each other, supporters give speeches, and then they have to try to get Iowans to physically move and stand with other supporters of their candidate of choice, usually in a portion of the room that represents the candidate. It's a lesson in peer pressure. There is no ballot-tallying to speak of. Instead, if a candidate doesn't win the support of 15 percent of attendees, they're eliminated. Very dramatic.

You may be wondering, but, why Iowa? Why indeed. It was a "right place, right time" situation. Right when both parties were working to reform the voting process, Iowa moved their caucus to the front. That was back in 1972, and in that first year not many people paid attention. That is, until they realized they should have. That first Iowa caucus predicted the surprising rise of George McGovern. Ever since then, political pundits, candidates, and the nation have been watching this small state with an outsized impact on the presidential election.

It's good to keep in mind that the caucuses aren't national primaries. They're essentially polls. They mean nothing, except that they could predict everything. To put things in perspective, every winner, except one, of a major party nomination since 1980 has started by winning either the Iowa caucus or New Hampshire primary. Nowadays, the event is a huge spectacle, with round-the-clock media coverage, predictions, rumors, months-long candidate camps and Iowa campaigns.

Is the caucus an accurate predictor? Historically, yes. But, statistically (in that the population is much more homogenous and rural than the rest of the country), no. Despite that, it's still treated as an important bellweather in the nomination process. The parties want to know who actually stands a chance of winning votes for their side. The Iowa caucus is the first real indicator. Come this weekend, the country will be abuzz with voting rumors and results. Election season is in full swing now, and it's on.