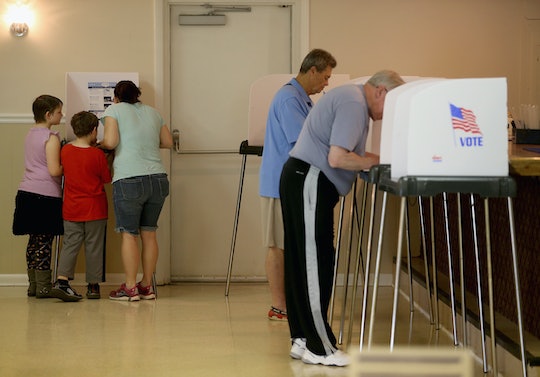 Why Is The Pennsylvania Primary Important? It's Got The Most Unbound GOP Delegates

After the dramatic, delegate-grabbing primary that was New York, Republican and Democratic candidates have turned their eyes to the five states voting Tuesday. Of the five — which include Connecticut, Delaware, Maryland, Pennsylvania, and Rhode Island — the Keystone State has been the biggest draw for candidates. Why is the Pennsylvania primary important? It's got a draw for both Republicans and Democrats, but the GOP's interesting delegate rules make this state especially important.

The first thing to note is that Pennsylvania has the largest delegate count of all the states voting Tuesday. While business mogul Donald Trump and former Secretary of State Hillary Clinton are definitely leading the pack of nominees, the numbers still count. There are 189 delegates and 21 superdelegates up for grabs on the Democratic side, which would be a worthy chunk for Vermont Sen. Bernie Sanders, who was picking up momentum before his loss in New York to Clinton.

However, for Sanders to catch up to Clinton's lead seems unlikely. According to The Daily Pennsylvanian, Clinton's got a 275-delegate, 477-superdelegate lead on Sanders, which becomes harder for Sanders to gain traction on as the number of primary states left grows smaller, despite Sanders' increasing popularity. If Sanders won all the delegates up for grabs in Pennsylvania and Maryland, he could catch up to Clinton — but unfortunately for those feeling the Bern, that probably won't happen. (A RealClearPolitics polling average shows Clinton 16 percentage points ahead of Sanders.)

Once we flip over to the GOP side of things, however, Pennsylvania becomes interesting for more reasons than its larger piece of the delegate pie. Because American politics are odd and each state has its own rules, the GOP delegates in Pennsylvania operate slightly differently. There are 71 Republican delegates in Pennsylvania, and 17 of them will be automatically awarded to the winner of the statewide vote (if current polls prove correct, that will be Trump — a RealClearPolitics average puts him 21.8 percentage points ahead of Cruz and 26.5 percentage points ahead of Kasich).

However, the remaining 54 delegates will be elected by the voters directly, without any information on the ballot as to which candidates those delegates will be voting for. To add to the fun, the delegates are unbound — meaning that if we reach the Republican National Convention in July without any one candidate securing the 1,237 delegate majority, those 54 Pennsylvania delegates are unbound. In other words, regardless of who wins Pennsylvania now, those delegates could change their mind and vote as they wish in the case of a contested convention, putting them under pressure from all sides (both from the Pennsylvania voters, who want to be represented, and the candidates, who want to win their votes).

Strap yourselves in for a rocky ride — Pennsylvania will definitely be an interesting state, and it might just prove to be surprising. Aren't politics fun?