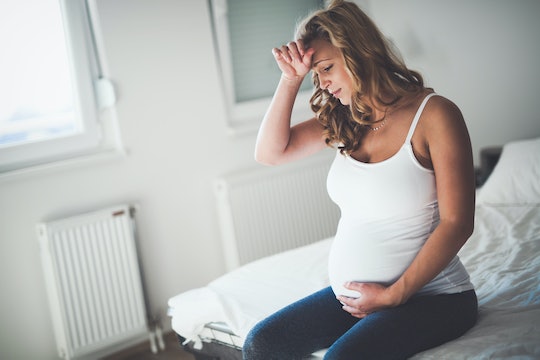 You can't watch a single news program right now in the United States or Canada that doesn't have at least a few stories featuring influenza-related deaths and illnesses across the country. The fact is, this year has been a terrifying and deadly year for the flu, and that has many of us especially worried. If you're a mom, or about to become one, the effects of this fear are heightened. So why is the potentially deadly flu especially dangerous for pregnant women?Unfortunately, children, elderly, and pregnant women are the most vulnerable to the virus.

According to the Centers for Disease Control and Prevention (CDC), the flu for 2017/2018 is the H3N2 strain of virus. Over 20 children have perished per their calculations, and there are huge clusters of flu all over the country. This year, the flu vaccine was not as helpful as they would've liked, only protecting somewhere between 15 and 32 percent of people vaccinated if you look at the data on the weekly reports. However, because pregnant women undergo significant physiological changes to their lungs, immune system, and heart during their gestation, they are at a significantly higher risk for complications related to influenza, and should absolutely get the vaccine, as per the recommendation of the American College of Obstetrics and Gynecology (ACOG). According to the CDC, it can also be given during any trimester of pregnancy.

That being said, the CDC and ACOG, as well as every doctor I've seen come on the television to discuss the flu, has said, "I don't care who you are or what you do, get the flu shot." It's that bad this year. Seemingly young and healthy people are dying from this strain. So far, it's not as bad as the 2014 to 2015 flu as per the CDC's most recent presser, but it's getting close.

"Vaccination is our main tool to prevent influenza infection, and CDC recommends that vaccination efforts continue as long as influenza viruses are circulating. It about takes two weeks for protection from vaccination to set in, but as I said, we have a lot of flu season to get through still," Dr. Dan Jernigan, Director of the Influenza Division in CDC’s National Center for Immunization and Respiratory Diseases explained in a media statement.

If you're pregnant, and you get the flu, it's recommended that you use antivirals like Tamiflu and its generic equivalent. "These drugs can lessen the symptoms and shorten the duration of illness, and there’s observational studies and other studies that have shown they prevent serious flu complications," Jernigan explained. Serious complications from flu for pregnant women other than maternal death can be premature birth, preterm labor, miscarriage, neural tube defects like spina bifida, and other possible birth defects, noted the March of Dimes.

Thankfully, whereas the flu of the 2014 to 2015 season was mutating and not very responsive to the antiviral medications, this year's flu seems to be fairly stable and responsive. Jernigan also reported,

"...we are not seeing really any of these viruses that are currently circulating that will not work with the antiviral drugs. Currently, there’s also Oseltamivir, there is also Zanamivir which is an inhaled drug, there’s a new drug called Peramivir which can be given through an IV and it can be given to children now."

Currently, as per the CDC, only about 50 percent of pregnant women receive the flu shot during any given season, regardless of recommendation, often citing fear over miscarriage. According to the CDC and ACOG, there is no proven link between the vax and miscarriage. However, the ACOG understands this fear, citing that they continually monitor the flu vaccine as well as any other they may administer to pregnant women for safety and efficacy. "In evaluating all of the available scientific information, there is insufficient information to support changing the current recommendation which is to offer and encourage routine flu vaccinations during pregnancy regardless of the trimester of pregnancy," the ACOG noted.

ACOG also explained why the potentially deadly flu is especially dangerous for pregnant women when they released their notes to providers pre-flu season that not only strongly recommended vaccines for patients, but also for the providers themselves. They know they are leading by example and also that they are potentially protecting the portion of the population that chooses not to vaccinate.

I spoke with emergency room nurse Alba Sabino of Brooklyn, New York, and she tells Romper, "Pregnant women can get hit fast and hard and take longer to recuperate. If they get dehydrated, which is a common problem with the flu, they can go into labor, and we have a hard time stopping it." She says she's also seen pregnant patients require more help breathing, remain hospitalized for longer, and are overall just more likely to be hospitalized in the first place.

There are ways to help prevent yourself from getting the flu. Wash your hands frequently. Use hand sanitizer between washes. Don't touch your hands, eyes, or mouth unless you've just washed your hands. Don't use public water fountains. Clean your home thoroughly, as the CDC noted that the flu virus lives on surfaces for 24 hours. (Which isn't actually that bad — norovirus lives much longer.) And most importantly, get vaccinated, and make sure everyone in your home is also vaccinated. An ounce of prevention is worth way more than a pound of cure when it comes to the flu.