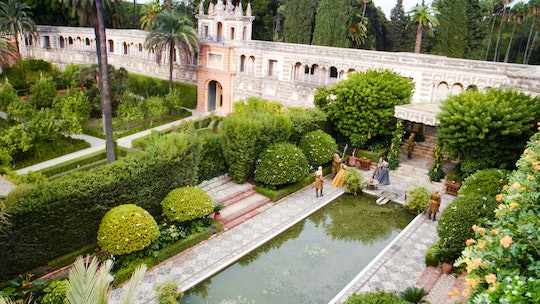 Why Is The Tower Of Joy Called That On 'Game Of Thrones'? It's Significant

The Tower of Joy has taken on a lot of significance with Game of Thrones fans, but it's also shrouded in mystery. The Tower of Joy commonly refers to both a place and the events that transpired at said location, though information about what exactly went down there is hazy at best. It's a tower located in the Red Mountains of Dorne where Prince Rhaegar Targaryen was holed up with Lyanna Stark, and it's also the site of a pretty important altercation. Considering all the horrible things that happened there, why is the Tower of Joy called that?

The short answer is that it was named by Rhaegar, so either he had a pretty twisted sense of humor or things weren't as dire as they seemed. Though already married with two kids, Rhaegar fell for Lyanna and disappeared with her; it's not really clear how consensual this escapade was, but that's part of the flashback we're hoping to see from Bran. Robert, Lyanna's betrothed at the time of her disappearance, said Rhaegar abducted and assaulted her. However, other characters have spoken of how good and true Rhaegar was, making it seem out of character for him to be so cruel to Lyanna.

The books themselves are unclear when it comes to the tower's naming. There's only one reference to the name of the tower, and it's pretty brief: "It was said that Rhaegar had named that place the tower of joy, but for Ned it was a bitter memory." No surprise there, considering it was where Ned's sister Lyanna died and where seven knights perished while fighting to get to her. After everything that happened, Ned Stark destroyed the tower with his own hands, making his less than joyous feelings for it pretty obvious.

If Rhaegar and Lyanna were in love, then christening their love nest the Tower of Joy makes sense; it was where they could be together and be happy despite the catastrophic amount of damage their relationship did to the kingdom. Summed up nicely by reddit user RichieAppel, "Rhaegar couldn't decide whether to name the tower, the Love Shack, or the Tower of Joy. He must have decided on the Tower of Joy at some point, although we don't know why yet." If Rhaegar and Lyanna were not together by choice and Lyanna is truly Rhaegar's victim, then Rhaegar was operating on Ramsay Bolton levels of twisted.

If you want to get more literary with it, then GRRM could have dubbed the tower in reference to either the Joyous Gard, a place in Arthurian legend where Lancelot lived and where he ran off with Queen Guinevere, or the Bower of Bliss, which comes from Edmund Spenser's epic poem The Faerie Queene. The Bower of Bliss is where the seductress Acrasia entraps knights and where she is eventually defeated by Sir Guyon, the "Knight of Temperance," who also destroys the Bower. Both references do seem to suit the the Tower of Joy, which is the site of an affair and also a place rife with double meaning, joy and misery.

With a flashback to the Tower of Joy coming up in season six's third episode, "Oathbreaker," it seems like fans will finally be getting some answers.