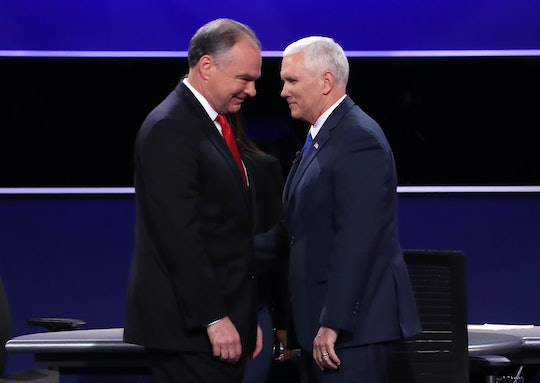 On Tuesday, the vice presidential candidates of the two major parties took the debate stage at Longwood University for the first and only vice presidential debate of the 2016 campaign season. As soon as Democratic VP pick Sen. Tim Kaine and GOP VP pick Gov. Mike Pence stepped out on the stage, there seems to be one question on everyone's mind: Why is Tim Kaine wearing a red tie and Mike Pence wearing a blue tie? Both vice presidential hopefuls seem to have taken cues from their respective presidential partners: The Dem wearing red while the Republican wears blue — a complete swap of party colors. And with their tie colors as bright as they are, it's a pretty glaring, not to mention a confusing, fashion choice.

At the first presidential debate in September, Democratic candidate Hillary Clinton stepped out on stage in a blazing red power suit while Republican candidate Donald Trump wore his signature look of a black suit and white shirt — but donned a blue tie, departing from his usual red tie. At the vice presidential debate, it seems as though Kaine and Pence have done the same party color switcheroo — and it turns out, there's a ton of psychology at work here, too.

The color choice of Kaine's and Pence's ties could come down to more than just a political party mixup: They could be using color psychology to their advantage. A 2009 study published in the journal Science examined not only the popularity of red and blue ties, especially among politicians — but what red and blue colors convey psychologically.

According to Juliet Zhu, the study leader from the University of British Columbia, their results showed that red tends to make people focus on details, while blue enhances creativity. Speaking to Live Science, Zhu noted that the color psychology of red is ingrained in our psyche:

The avoidance motivation, or heightened state, that red activates makes us vigilant and thus helps us perform tasks where careful attention is required to produce a right or wrong answer.

Kaine's choice of a red tie seems to back up Zhu's assertion, as he has fired off fact after fact and quote after quote to bolster his arguments. Meanwhile, Pence, much like Trump, has spoken largely in generalities and emotive appeals. Pence's blue tie seems to align with Zhu's study results as well: Zhu said the "benign cues" of blue skies and blue oceans "make people feel safe about being creative and exploratory." The difference in the two vice presidential candidates' debate styles are clearly obvious to the audience, tie colors aside:

After the debate dust settles however, the winner of the vice presidential debate won't be decided by tie color alone.