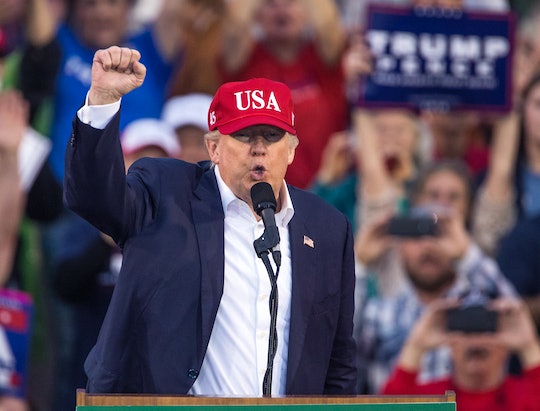 Why Trump Plans To Shut Down His Foundation

After months of ongoing scrutiny over potential conflicts of interest surrounding Donald Trump's vast business empire, the president-elect is reportedly planning to shut down the Trump Foundation, the charitable foundation in his name that is currently under investigation by the New York State attorney general's office over questions about its funding and the recipients of its donations. The news comes less than a month before the real estate mogul is set to be sworn into office on Jan. 20, and perhaps has led many to wonder why Trump is dissolving his foundation. Romper reached out to Trump's team for comment on the decision to shut down his foundation and is awaiting a response.

In a press release on Saturday, Trump announced that he has chosen to dissolve his foundation, which was founded in 1988, "to avoid even the appearance of any conflict with my role as President" as he prepares to enter the Oval Office next month.

"The foundation has done enormous good works over the years in contributing millions of dollars to countless worthy groups, including supporting veterans, law enforcement officers and children," Trump said in the statement. "However, to avoid even the appearance of any conflict with my role as President, I have decided to continue to pursue my strong interest in philanthropy in other ways."

The president-elect wrote that he intends to pursue his "strong interest in philanthropy in other ways" and added that his counsel will take the necessary steps to "effectuate the dissolution."

Earlier this year, Trump's foundation came under heavy scrutiny after The Washington Post reported that the president-elect's charity "never obtained the certification that New York requires before charities can solicit money from the public." In October, the New York attorney general's office reportedly ordered the foundation to stop soliciting donations.

According to CNN, the Trump Foundation reportedly admitted that it had violated IRS rules by "improperly giving money to someone close to the organization."

Trump said in Saturday's statement that he is "very proud of the money that has been raised for many organizations in need and "the fact that the Foundation has operated at essentially no cost for decades, with 100 percent of the money going to charity." He continued:

... but because I will be devoting so much time and energy to the Presidency and solving the many problems facing our country and the world, I don't want to allow good work to be associated with a possible conflict of interest.

Some have noted on social media that announcing this news on Christmas Eve may have been an attempt to bury it in the midst of holiday festivities, but according to The Boston Globe, his foundation cannot be dissolved while it's sill under investigation.

While Trump has yet to deliver a press conference about how he plans to handle his businesses to avoid any conflicts of interest, this news doesn't clarify many of the questions the nation still has about his plans to run the nation without any possible pressure from outside sources.