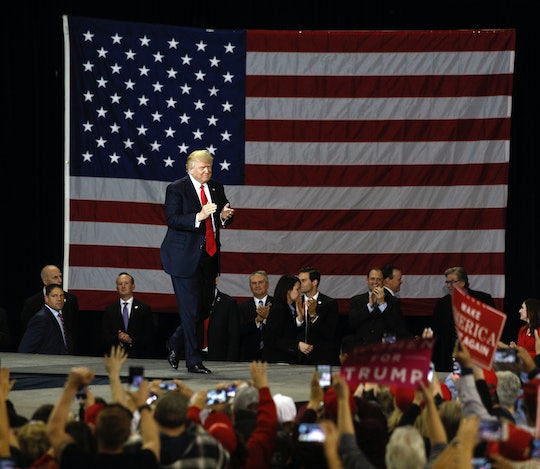 Why Is Trump Still Holding Rallies?

On Jan. 20, Donald Trump was sworn in as the 45th president of the United States. You would think, then, that that would be the end of his campaigning—but no. Instead, President Donald Trump continues to tour the country, pandering to his base with elaborate events. And that's left one question on everyone's mind: Why is Trump still holding rallies? It seems the race to 2020 has already begun.

Trump has only been in office for two months — two months — yet his presidential re-election committee is working on securing his victory in 2020. Last week, The Daily Show correspondent Jordan Klepper attended a private rally held in Nashville, Tennessee, to understand why, exactly, Trump is "running for president while he's president without doing presidential shit," Business Insider reported. The answer, according to one supporter: "Because Donald Trump's the man."

As Entertainment Weekly pointed out, Kleeper had a more elaborate response to his own question in a segment that aired during Tuesday night's show:

Reason number one: He’s making money that goes straight into his campaign fund. Number two: it’s not a public event, guaranteeing that these are his people .. In other words, a classic Trump rally full misogynistic t-shirt, minorities getting kicked the fuck out, and Trump supporters like this reacting to minority protesters.

Trump's 2020 re-election committee organized and funded the Nashville rally, which has raised "eyebrows among campaign finance experts, veteran political operatives and officials from the last three administrations," according to CNN. That's because, traditionally, presidents use federal monies to push their agenda during their four years in office, with re-election committees financing events once there are actual opponents to run against. But, as CNN reported, Trump has flouted rules — he's filed the legal paperwork needed to allow his campaign committee to pay for re-election events. Trump, by the way, hasn't actually announced his intention to run in 2020.

He's thinking like the businessman he is, though. According to CNN, because his re-election committee is funding these events, that means Trump can sell his campaign merchandise and advertise rallies. That means more of those ugly red "Make America Great Again" hats on people's heads. In other words: Trump gets the money and adoration he desires above all else.

If you ask his supporters on Reddit, they'll tell you Trump is holding rallies to "take his message direct to the people without it being chopped and screwed" by mainstream media. But if Klepper's Daily Show segment is representative of all Trump rallies, it would seem these events exist solely so the president can pretend he's "winning" and his supporters could live in the past.

Trump is more than half way through his first 100 days in office, and he's already broken a good chunk of his campaign promises. Sure, he's hellbent on building the wall, and for some supporters, that's enough. His vows to bring back jobs and stop the opioid crisis, though, are undercut by his deregulation of environmental protections and rollback of healthcare benefit requirements. It's hard to believe he's the president his voters expected.

But, sure, that "Hillary for Prison" t-shirt makes sense still.