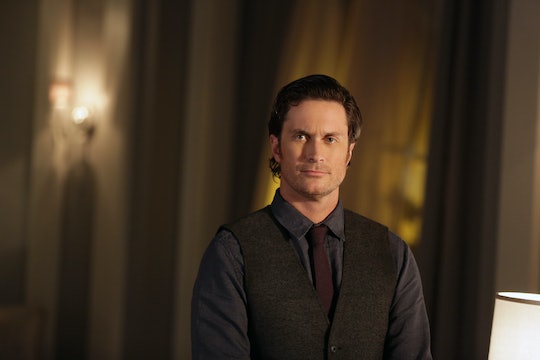 Why Is Wes Returning To 'Scream Queens'? Grace's Dad May Be Up To No Good

In the lead up to the winter hiatus, the action on Scream Queens is heating up, and it looks like all of us wannabe Chanels are in for some surprises — one of which involves the return of a Season 1 favorite in next Tuesday's promo is any indication. Why is Wes returning to Scream Queens? Grace's dad was shown in the promo for next week's episode titled, "Rapunzel, Rapunzel" and I have a feeling he may be up to no good. We haven't seen several of the characters from Season 1 of the show, and this arrival can't mean good things for the Chanels. It could, however, mean a little action for Dean Munsch.

After an episode that was pretty light on action but heavy on exposition and the meaning of love, I, personally am excited at the prospect of another familiar face to shake things up a bit. We know that Grace's dad was a bit of a horndog in his day, and spawned at least two serial killers in the '90s when "nobody wore condoms." We also know that he and Dean Munsch have some history between them of the sexual variety. Now that Dr. Brock Holt and Chanel seem to have solidified their relationship, I'm guessing that Dean Munsch could use a little between the sheets action. She hasn't taken Brock's rejection very well at all, even going so far as to make him perform an impossible surgery in part to punish him.

But Wes's return could mean more than just that Dean Munsch will get laid. Like every character on this series, Wes is pretty morally ambiguous. His history with Munsch suggests that he could possibly have some skin in this game (not literally). And after all, we don't know who the third Green Meanie is. Since we know that Nurse Hoffel wants the Chanels dead because she was Bean's sister, perhaps she also knew Wes back in the day. Is it possible that Wes and Nurse Hoffel are working together? Nobody comes to the C.U.R.E Institute without some sort of agenda. Check out the promo below:

We know that Dr. Cassidy Cascade is sort of a tame psychopath, and he's promised not to kill Chanel Number Three or Chanel (because, love) but I seriously doubt that Wes could make the same promises. But of course, this is all conjecture. And we won't know what's really up with this hot dad until it's revealed.