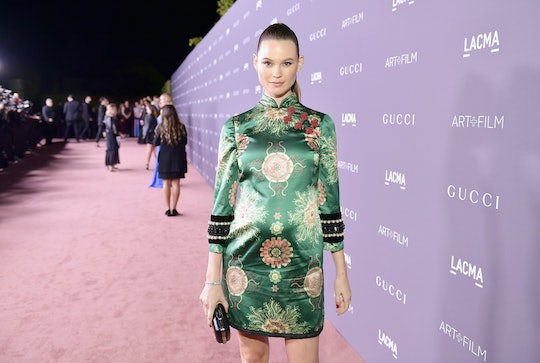 The 2017 Victoria's Secret Fashion Show is upon us, ushering in the holiday season with all the glitzy, spangly lingerie a girl can dream of. But after nine consecutive years donning Angel wings, one illustrious alum will be missing from the class of 2017. So why isn't Behati Prinsloo at the Victoria's Secret Fashion Show this year? There's quite an obvious bump in the road, if you catch my drift. That's right: she's currently super pregnant with Adam Levine's baby!

It's the couple's second child after getting married in 2014 and welcoming the ridiculously cute Dusty Rose Levine in September of last year. And although we don't know her due date yet, Prinsloo first showed off her still modest, but very visible bump on Instagram this past September, which means she'd still be growing come November, when the 2017 Victoria's Secret Fashion Show airs.

Of course, there are plenty of models who have walked the iconic lingerie runway while pregnant. Model Irina Shayk famously did it while in her second trimester at the 2016 show with a fierce collection of strategically belted coverups, garters, and high-waisted underwear. Alessandra Ambrosio was two months pregnant when she walked the show in 2011, but she didn't tell anyone from Victoria's Secret that she was expecting. Also pregnant during the 2011 runway show was Lily Aldridge, but she also didn't announce her pregnancy until a month later. And Doutzen Kroes walked the show while two months pregnant back in 2013.

As you can tell from most of these cases, pregnant models are indeed permitted to walk but there is something of an effort to downplay their bumps. And although it would be cool if we were at a point where we could celebrate pregnant bodies as sex symbols, too, Prinsloo is definitely too far along to hide her bump at this point, even with the magic of whimsical draping. The right model probably could and will challenge this custom someday, but there's also no shame in admitting that being stuck in a cramped, stuffy, chaotic backstage area for hours, followed by several long walks in impossibly high heels, all while being photographed from every possible angle doesn't sound like the most comfortable way to spend an evening for a heavily pregnant person.

For her part, Prinsloo seems to be taking it all in stride (see what I did there?), posting a throwback photo of herself walking the Victoria's Secret runway on Instagram with the caption, "I still pinch myself!! Tomorrow is the big day. Sending love to all the girls and the entire #vsfashionshow crew, i know what hard work I️t takes for everyone involved to make I️t happen. @victoriassecret I’m there in spirit screaming haha!"

In addition to being a nine-time alum of the Victoria Secret Fashion Show stage, Prinsloo has also opened the show twice — once in 2014 and once in 2015. And just because she isn't walking the VS runway doesn't mean she isn't still showing off her bump on the red carpet. She wore Gucci to LACMA's 2017 Art and Film Gala earlier this month, displaying her bump in a high-necked green minidress. And last month, she rocked her bump in a leopard-print bodycon dress at a dinner celebrating makeup artist Hung Vanngo hosted by InStyle and Marc Jacobs.

Prinsloo seems to be content cheering on her colleagues from the sidelines this year, not to mention, skipping the 14-hour flight from Los Angeles to Shanghai late in her pregnancy. You can catch the rest of the models doing their thing on CBS when the 2017 Victoria's Secret Fashion Show airs on Tuesday, Nov. 28.