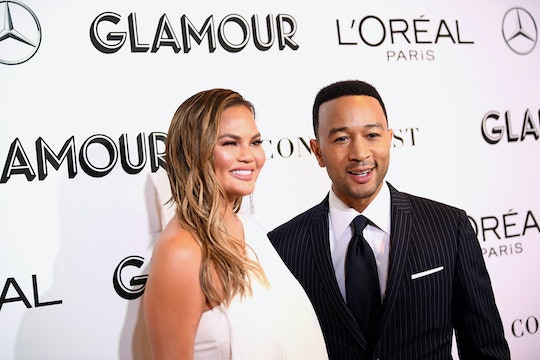 Chrissy Teigen is no stranger to red carpets. With her husband, musician John Legend, on her side, Teigen takes them by storm every single awards season. But she was notably absent from the red carpet at the 2019 Grammy Awards on Sunday. So, people at home had to be wondering — why isn't Chrissy Teigen at the Grammys? Let's just say, the couple is tired and can afford to miss an award show or two — even if it means missing one of the biggest nights in music all year.

By looking at Teigen and Legend, you would never guess that they're tired. Teigen is a model, TV host, Twitter personality, and amazing cook. While Legend somehow manages to be involved in the most amazing music projects. Together, they're the unstoppable, super devoted parents to their two young children under the age of two — daughter, Luna, and son, Miles, who Teigen just gave birth to last May, according to Us Weekly.

But, with so much on their plates, it's understandable why the couple would want a night spent at home with their kids, instead of walking on the red carpet and attending the 2019 Grammy Awards. And honestly, both of them might just be a little tired. In a tweet on Sunday night, Teigen shared a photo of Legend passed out on the couch, wrapped up in fuzzy blankets, explaining why they wouldn't be attending the Grammy Awards later in the day.

"No Grammys for us today," Teigen tweeted. "John got an EGOT and EGOT lazy."

Teigen, of course, is referring to the fact that Legend has achieved the ultimate goal — winning a Emmy, Oscar, Grammy, and Tony Award, or an EGOT. Legend was able to complete this major achievement in Sept. 2018, when he won an Emmy for producing Jesus Christ Superstar Live in Concert, according to CNN. After winning all of these prestigious awards, this means that Legend no longer has to attend any more awards shows, right? Just kidding.

There could be another reason why the couple missed out on the show. Legend was only nominated for just one award in the Best Musical Theater Album category for his work on Jesus Christ Superstar Live In Concert — and since it's likely that this category won't be aired during primetime, he could afford to stay home with his family. And that's exactly what they did.

But that isn't a bad thing. Everyone deserves a night off once in a while — and Teigen made the most of her night off, taking to her Instagram Story to share a "Not Attending The Grammys" makeup tutorial.

It's kind of hard to believe that Teigen has been attending the Grammy Awards for the past 10 years on Legend's arm, according to People. Just last year, Teigen reminded everyone that she first attended the Grammy Awards in 2008, sporting one very bold spray tan. "This tan!!! Lmao," Teigen captioned the photo.

Although she was pregnant last year, Teigen didn't dare to miss out on the awards show, wearing a gorgeous silver sequined dress that went perfectly with her bump. This was a big night for Teigen last year — in an Instagram post shortly after the event, she revealed that she was expecting a boy, according to USA Today.

By now, fans are aware that Teigen and Legend are practically a staple at the Grammy Awards. After all, Legend has been nominated for 29 Grammy Awards over the past 14 years and has won a total of 10 times — including the honor of Best New Artist in 2005.

But, people had a hint that Teigen might not be attending the Grammys. A few days before they were set to attend the awards show, Teigen tweeted to New York Congresswoman Alexandria Ocasio-Cortez, inviting her to her Los Angeles home to eat pizza with her family and watch the Grammy Awards, according to Glamour.

While Ocasio-Cortez accepted the invitation, she didn't join the couple on Sunday night on the red carpet, according to TMZ. So, who knows? She could very well be watching the awards show on their DVR a few days later. That sounds like one viewing party that anyone would want to be a part of.

Whether she's walking the red carpet with her husband, or hanging out at home with her kids (and a congresswoman), Teigen has pretty much proved that she's the most glamorous mama around. Even when she isn't on the red carpet.