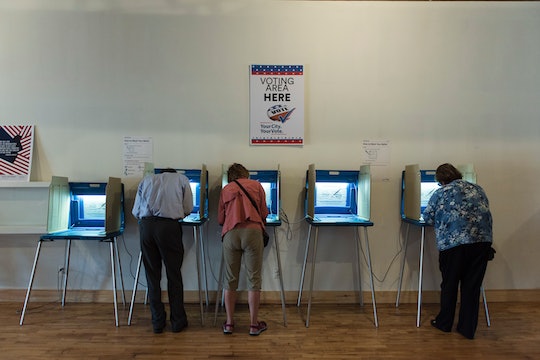 Why Isn’t Election Day A Federal Holiday? Giving People The Day Off Could Rock The Vote

Whether you can't wait to get out and vote or can't wait for this messy campaign season to come to an end, there's good news: Election Day is tomorrow! Every four years, the presidential election falls on the first Tuesday after the first Monday in the month. If the day seems like a random pick, there's actually logic that stands behind it. Well, logic that made sense in 1845. But one thing that isn't logical? Why isn’t Election Day a federal holiday?

The first Tuesday after the first Monday in November was chosen as Election Day in 1845 to accommodate farmers. By November, the fall harvest was over, granting farmers time to make the journey to vote. And because men would need to start traveling by Sunday — which would interrupt Sunday church services — if Election Day were on a Monday, Tuesday was chosen instead.

Which is great for those farmers. But fast-forward to 2016, it's not so great for the majority of Americans, who typically work from 9 a.m. to 5 p.m. on Tuesdays. Giving workers Election Day off seems like it'd be a way to encourage more people to get out and vote. And that's especially important given the fact that Pew Research reported that 53.6 percent of Americans old enough to vote actually did vote in 2012.

Even worse? Many of the people who didn't vote said it was because they couldn't get time off of school or work — 35 percent, according to a 2014 Pew Research study.

But making Election Day a federal holiday has proved to be difficult. In an interview with Rutgers University’s The Daily Targum, President Obama talked about the fact that our country has a history of establishing barriers to prevent people from getting out to vote.

We are the only advanced democracy that makes it deliberately difficult for people to vote. And some of it has to do with the nature of our history and our Constitution, where we allow individual states to determine their own processes for structuring elections within certain boundaries.

When asked if the United States should follow other countries' leads by holding elections on weekends or national holidays, President Obama responded "Absolutely."

You'd think with something as important as upholding people's right to vote that everybody would be on board with making Election Day a holiday. Some, however, believe making the day a holiday would not help retail workers who typically don't get holidays off, which is a fair point. But even in terms of making sure white-collar workers can take advantage of such a holiday, it's not that simple.

“It would be like trying to pass a constitutional amendment,” Michele Swers, a professor of American government at Georgetown University, told business website Marketplace. “If you’re going to make it a federal holiday, that’s basically forcing companies to give workers additional vacation time, so that’s going to cost them money and productivity."

But some companies are willing to lose money for the greater good (especially since elections are not that frequent). Companies ranging from General Motors to Spotify are giving their employees Election Day off so they can perform their civic duty.

So I guess you don't have to be a farmer, after all.