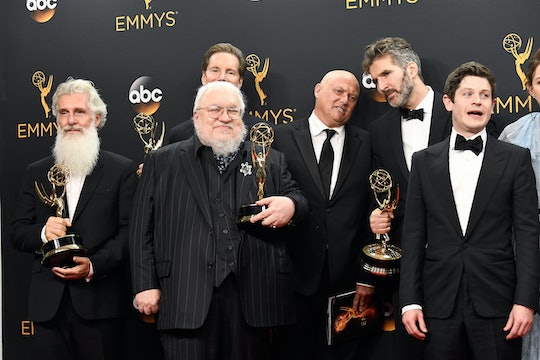 The nominations for the 69th Primetime Emmy Awards are about to be announced on Thursday, July 13, though they might look a little strange to you. Many of your old favorites will undoubtedly receive their expected nods once again, but why isn't Game of Thrones nominated for an Emmy this year? They usually kill the award season game, but right now the series is going to be noticeably absent, and you can thank that Season 7 premiere date.

In past years, the series would generally begin airing its seasons in April and would conclude them sometime in June. But this year Game of Thrones has a much later premiere date (July 16), so that it could have more time to film during the winter, seeing as the ancient Stark prediction, "Winter is coming," finally came true. This means that it missed the May 31 deadline for Emmy consideration. The upshot is that, for the first time since it began airing, Game of Thrones is not up for nomination at this year's Emmys.

That later premiere date sure is messing up a lot of things, isn't it? (Sigh — only a few days left of waiting). But this may actually have an overall positive consequence. Game of Thrones has taken up a lot of nomination spaces in the drama categories over the past six years — and they've totally deserve it, most of us would agree. But that doesn't leave a lot of room for other, equally deserving shows. So this time around some less-appreciated dramas will be getting a greater chance at the spotlight. Also, with Game of Thrones completing its final season next year, it might give you some ideas as to what you can watch once we all leave Westeros for good.

Catch the Game of Thrones, Season 7 premiere on HBO on July 16, and the 69th Primetime Emmy Awards on CBS on Sept. 17. I guess we'll just have to wait until next year to see them sweep the Emmys again.